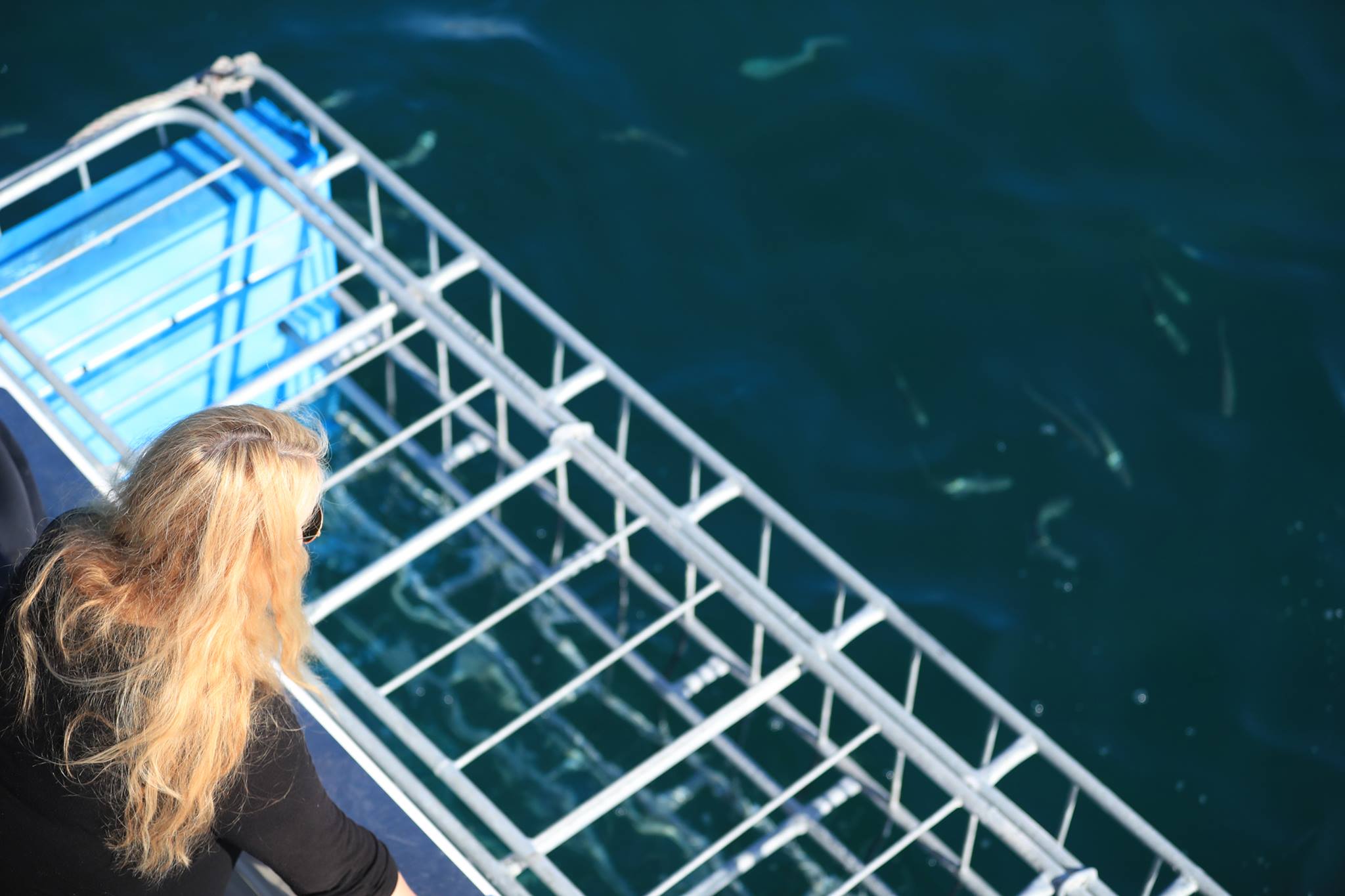 It would be our fourth try. On the third try my husband got in the cage when a large female great white appeared, but the two days before that? Nothing. I had stayed in the hotel on the third day because I wasn’t feeling well, but once I heard he had been successful I kicked myself. These unpredictable fish hadn’t been showing up like they used to, despite the chumming of the water, the large tuna heads and the fake seal decoys used as bait. I would have to try again the next morning.

We started in Simons Town, near Cape Town in late August. Our dive company told us they hadn’t seen any great whites since August 11th and recommended we make the 4-hour drive to nearby Mossel Bay. Still, we went out on a dive with them and saw some seven gill sharks near Seal Island.

The boat was loaded with tourists and when it returned to shore unsuccessful with great whites you could hear a pin drop. People who had planned only one dive realized they had missed their chance to have their own personal shark week. It’s not like you can do this just anywhere, there are only a few places in the world where it can be done. South Africa happens to be one place where you do not need to be a diver – you can hold your breath, snorkel or SNUBA for the brief moments in the cage. Mexico and Australia locations require you to be a certified SCUBA diver on a pricey live aboard. 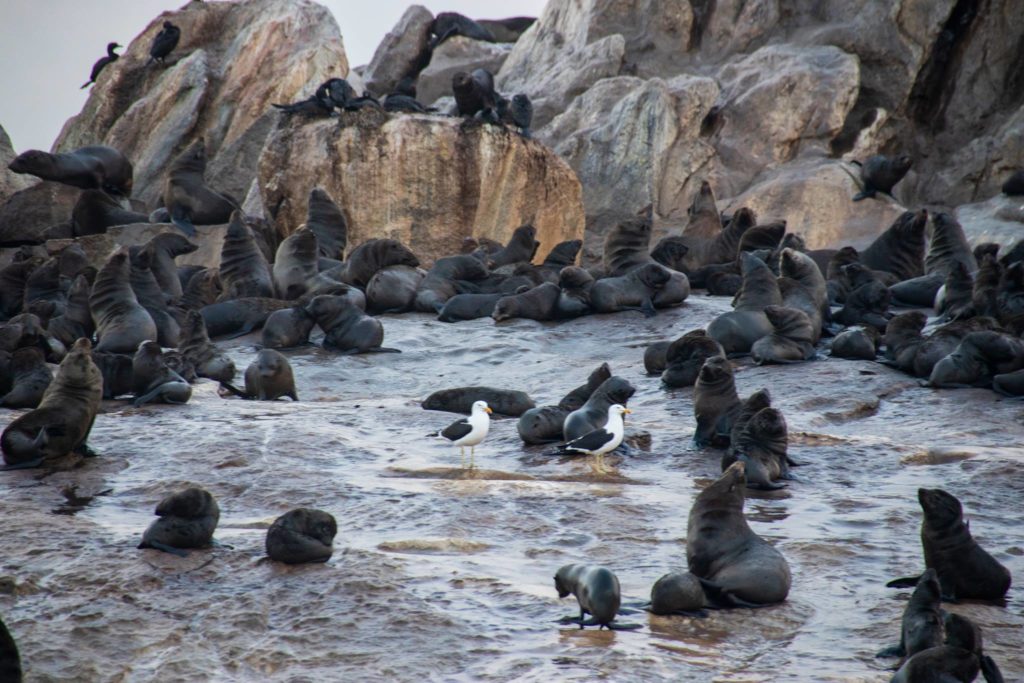 Seal Island near Simons Town – just off this island is the preferred hunting ground of Great White Sharks.

When my husband returned triumphant to the hotel room we celebrated his good fortune. Not only had he seen the shark in person, he’s gotten some great footage of it with a GoPro and had been forwarded a clip from the surface which showed the shark swimming toward the cage while he was in it, grabbing it with it’s teeth and shaking it.  I was happy for him but a tad bit envious. We were both supposed to have this experience.

The next morning we rose early and made the walk to White Shark Africa, not far from where we were staying. I signed the obligatory waiver and watched the NatGeo documentary filmed in Mossel Bay. As we walked to the boat I wondered if I had missed my chance – these sharks had only been showing up every third day on average lately. I got on the boat and the one thing that stood out was the warm sunshine and gentle breezes as the boat captain announced that it was the first day of spring in the southern hemisphere. It was a good sign. 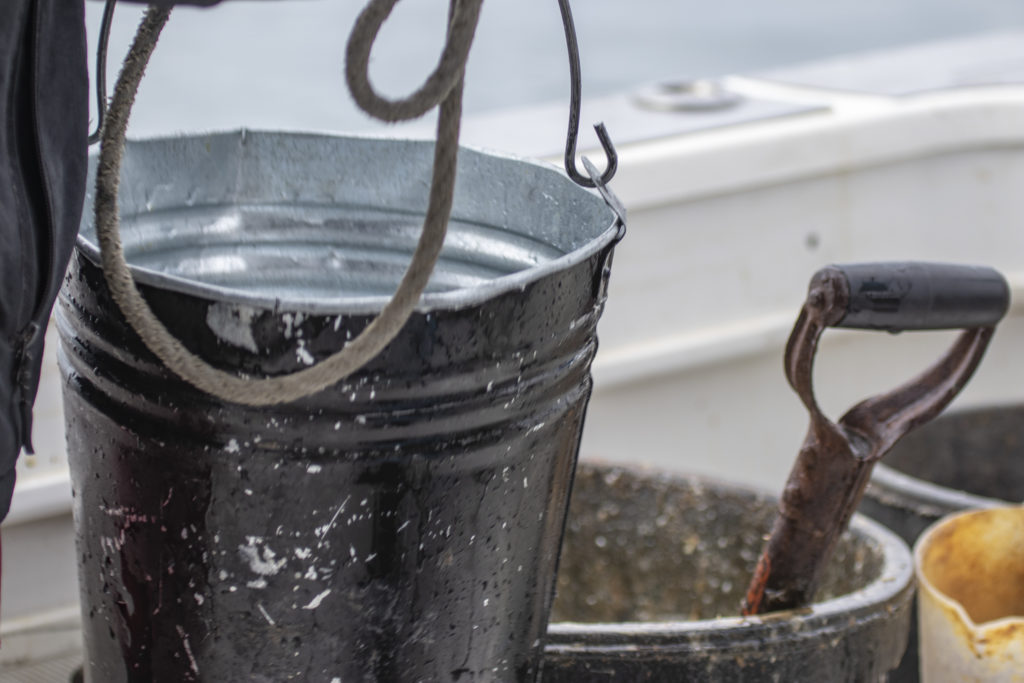 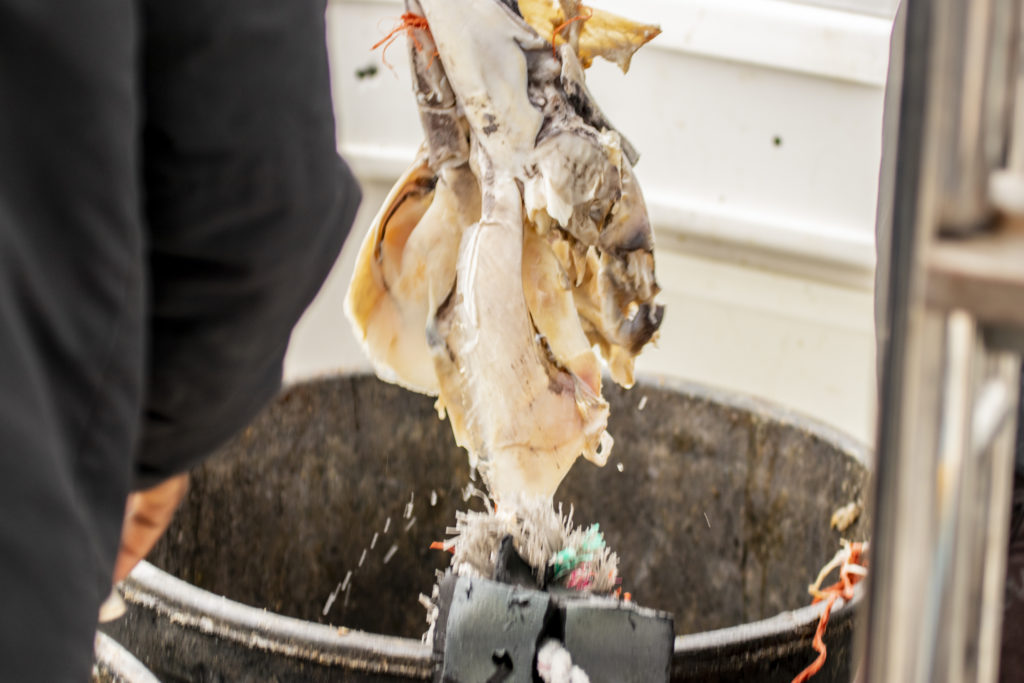 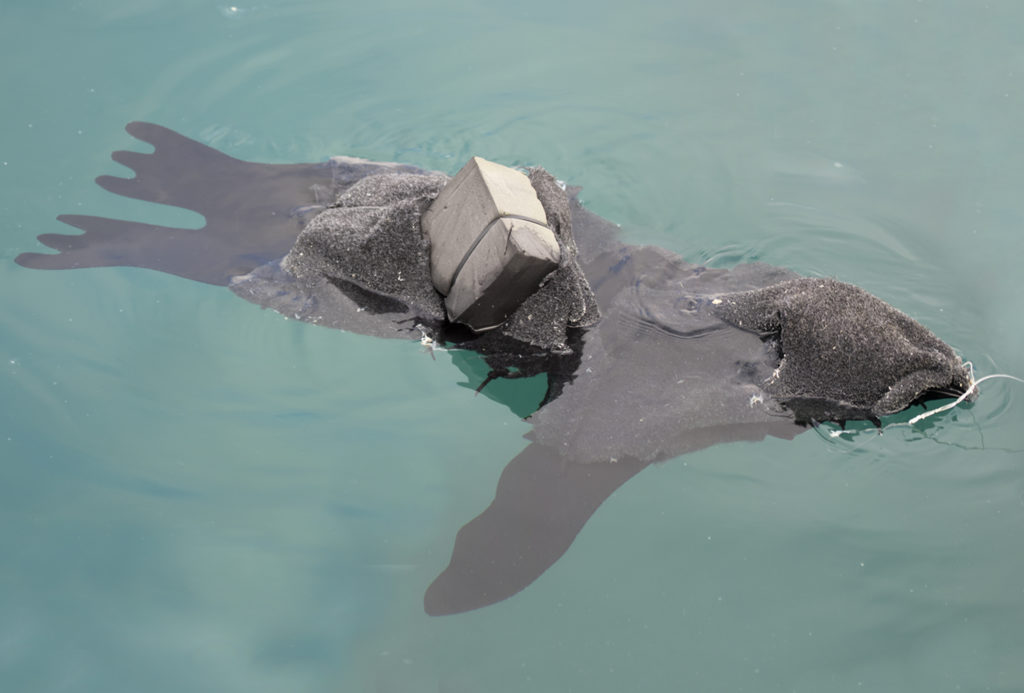 We made the ten minute ride out to seal island, dropped anchor and chummed for a few hours. I had been on two boats that had to return without seeing them, but I clung to my husband’s experience and remained positive. We sat there for hours, thinking every fish that came to the surface was my chance. Another good sign was that the seals were swimming very quickly, meaning predators were in the water. It wasn’t good news for the seals of course, but it was good news for us. 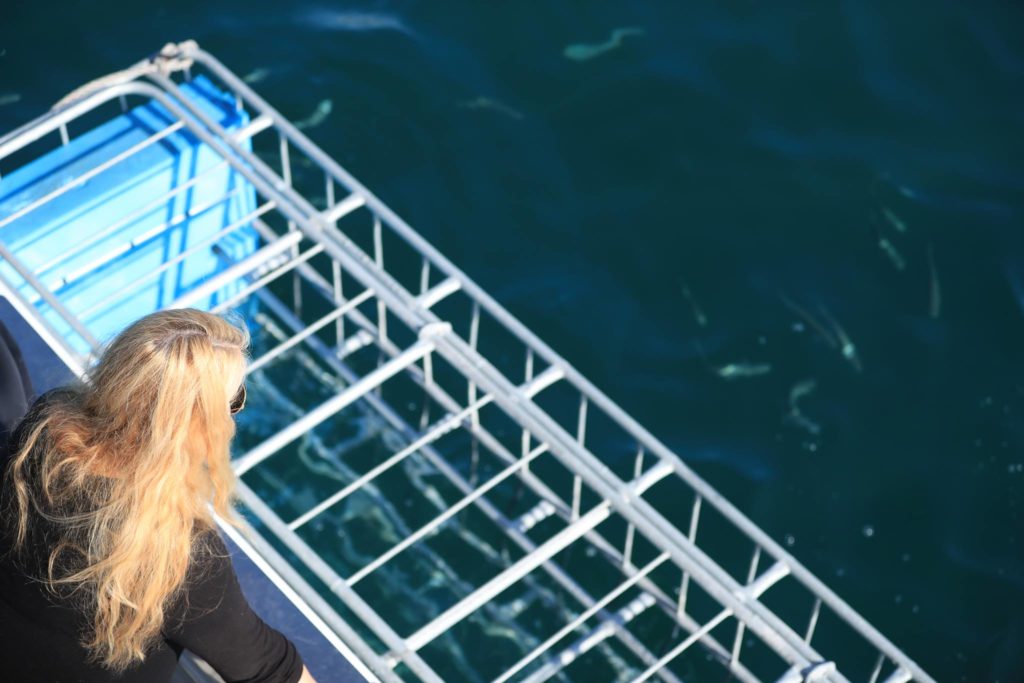 Time ticked by and as the time for us to return to shore approached the boat was silent. Suddenly a jubilant shout of “shaaaark!” was heard. The boat shifted in the water as all of the passengers ran to the port side to see her. She was back – not just one but two, a much smaller one along with the same female who had been at the boat the day before. At last I knew my luck had changed for the better.

A great white shark appears from the deep.

We were instructed to get in our wetsuits and the first group of six, including myself, were doing it as quickly as possible. From there we slid over the side of the boat, dropped into the cage and climbed down. There were horizontal bars to pull yourself under water with along with the lowest horizontal bar to put your feet under and hold yourself down due to buoyancy. 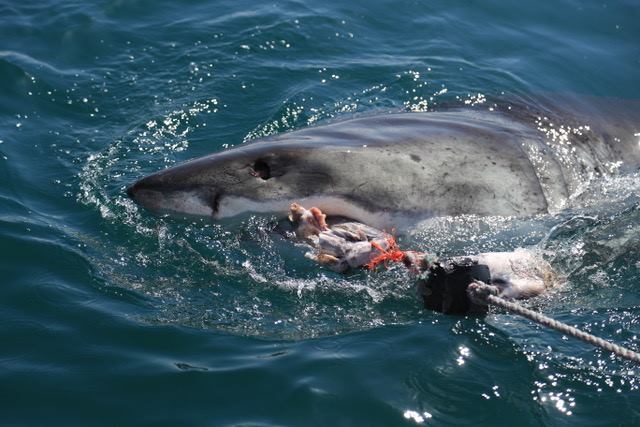 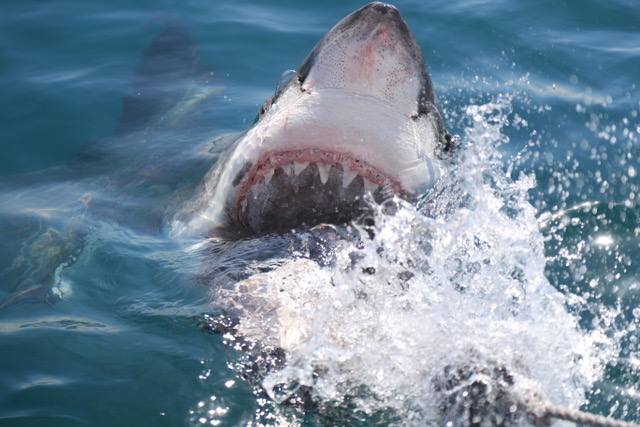 Great white shark – but those teeth.

I went under the water when instructed and saw her – a large female white shark about 12 feet long who was also very wide. Those distinctive black eyes and huge teeth gave her away. My mask was a little fogged and I was filming into the sun but the GoPro footage turned out well, allowing me to keep the memory of this exhilarating experience. Something told me to be extra careful of my feet, I later watched another video which showed me she had gone to the bottom area of the cage right by my feet. She wasn’t after me but the tuna head being used to lure her in close.

As the dive master said, it is clear to see that these sharks are not what the movies make of them – they have their own prey and the only time it is a problem are cases of mistaken identity. Because their teeth are so massive and their jaws so powerful, it makes any unintended encounter potentially deadly. I was thrilled to share the ocean with her for a few moments in relative safety.

Locals say the best time to do this is in June or July. Theories on the scarcity of sightings range from seasonal temperature changes between winter and spring, large pods of killer whales who attack great whites, the overfishing of the great white’s main source of prey which is another species of shark, as well as the arrival of thousands of southern right whales in August.

There are three areas to do this from in South Africa – Simons Town, Gansbaai or Mossel Bay. Contact your desired dive company and they should let you know where your best chance of seeing one will be. Be sure to plan multiple days to increase your chances of seeing one in case of fickle sharks or inclement weather and high waves. 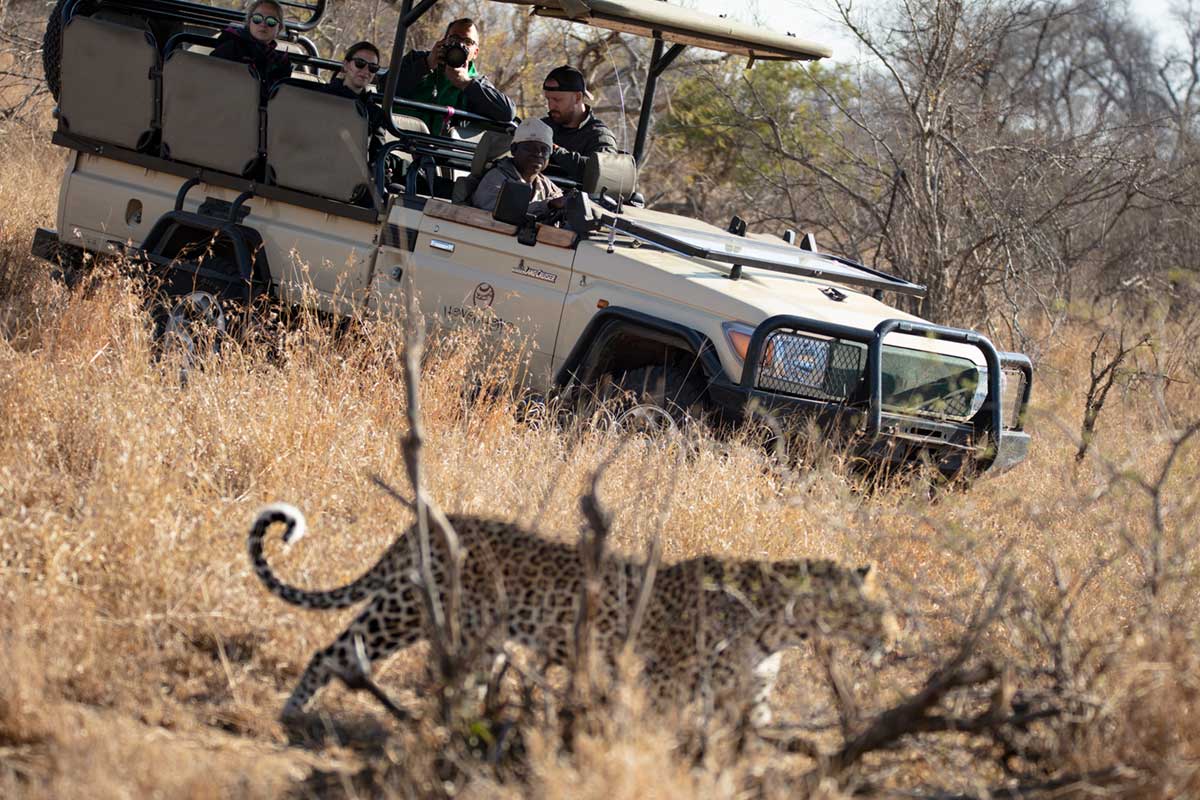