Few sights are more spectacular than Kauai’s Nā Pali Coast. Set on the northwest corner of the island, it is a lush and remote area in the Nā Pali Coast State Park. It’s stunning green, brown and red cliffs which stretch from sea to sky were made famous in opening segment of the 1970’s show: Fantasy Island. 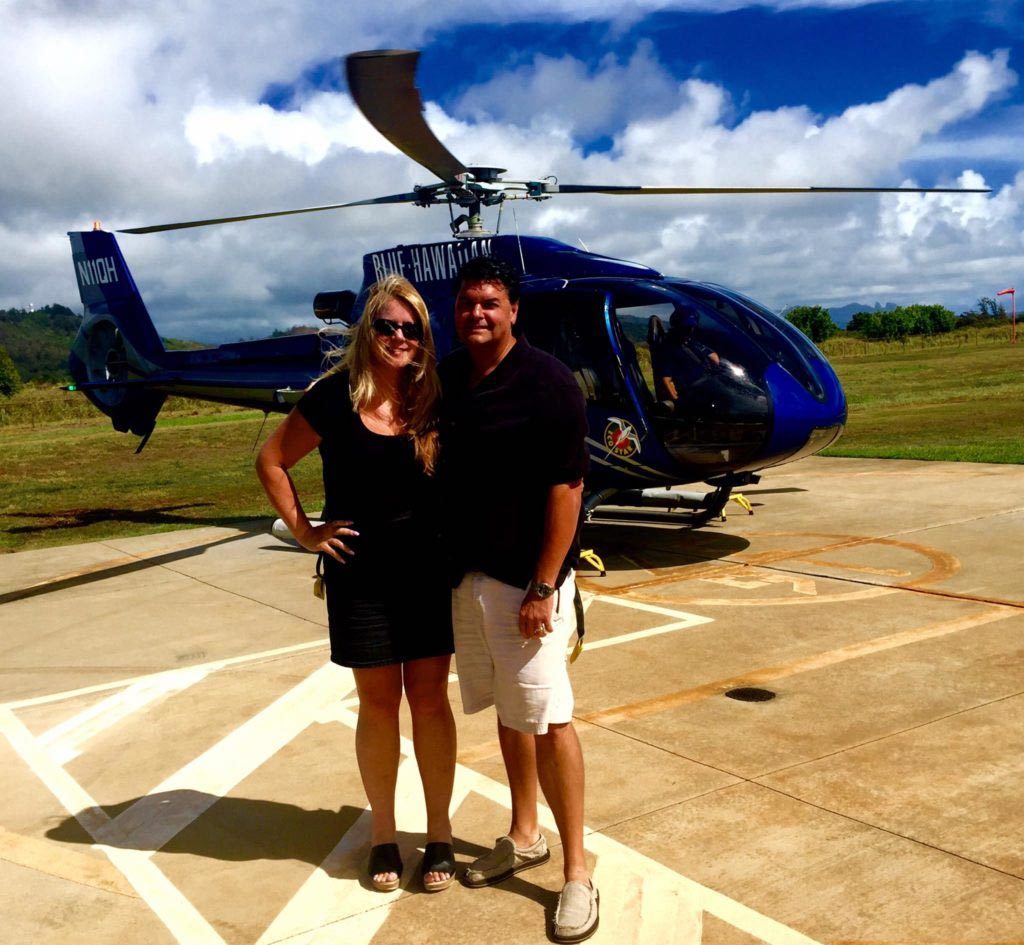 By Air: Blue Hawaiian Helicopter Tours
There are several companies offering helicopter tours on the island, we chose Blue Hawaiian. They operate throughout the Hawaiian Island chain and have a good safety record. We were impressed with their streamlined orientation and boarding process.

This tour was always on my bucket list due to the shear natural beauty of the area, and it fully lived up the hype. The dramatic cliffs, light blue water coves and lush greenery did not disappoint. The cliffs are absolutely breathtaking and completely unspoiled – it’s pure Hawaii. 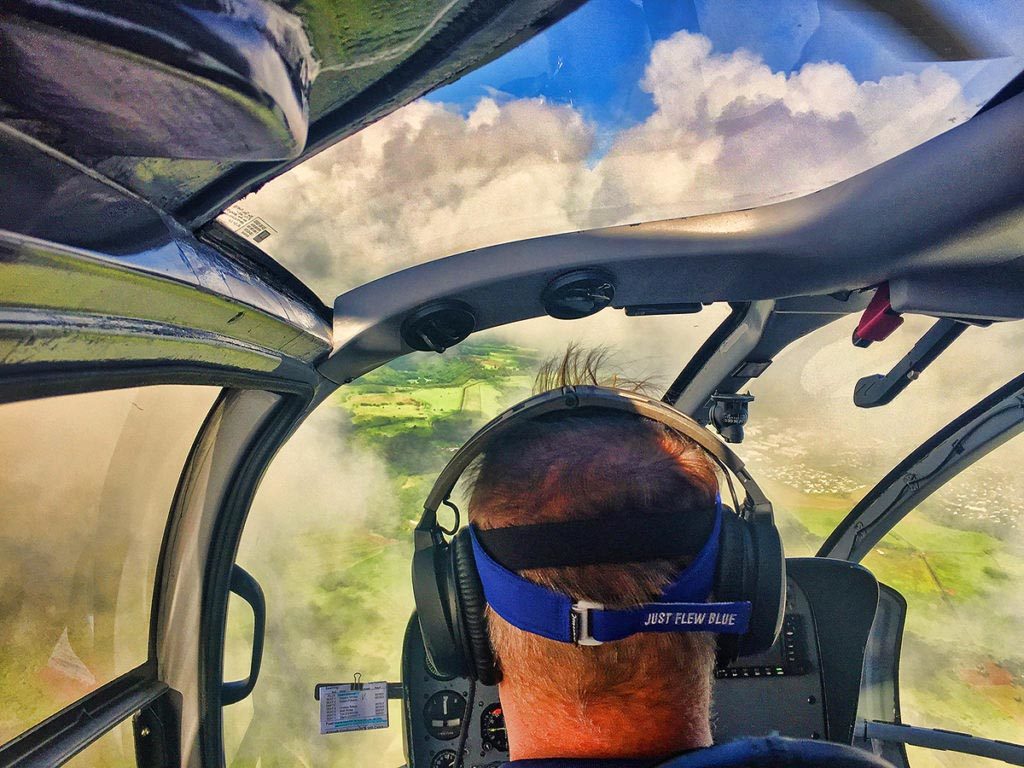 On parts of our tour we flew through some wispy clouds, then the sky opened up in this area of the coastline so don’t assume your tour will be cancelled if you see a few clouds. The tour costs around $500 for two and lasts about an hour. This is by far the most visually stunning way to see the Nā Pali Coast. 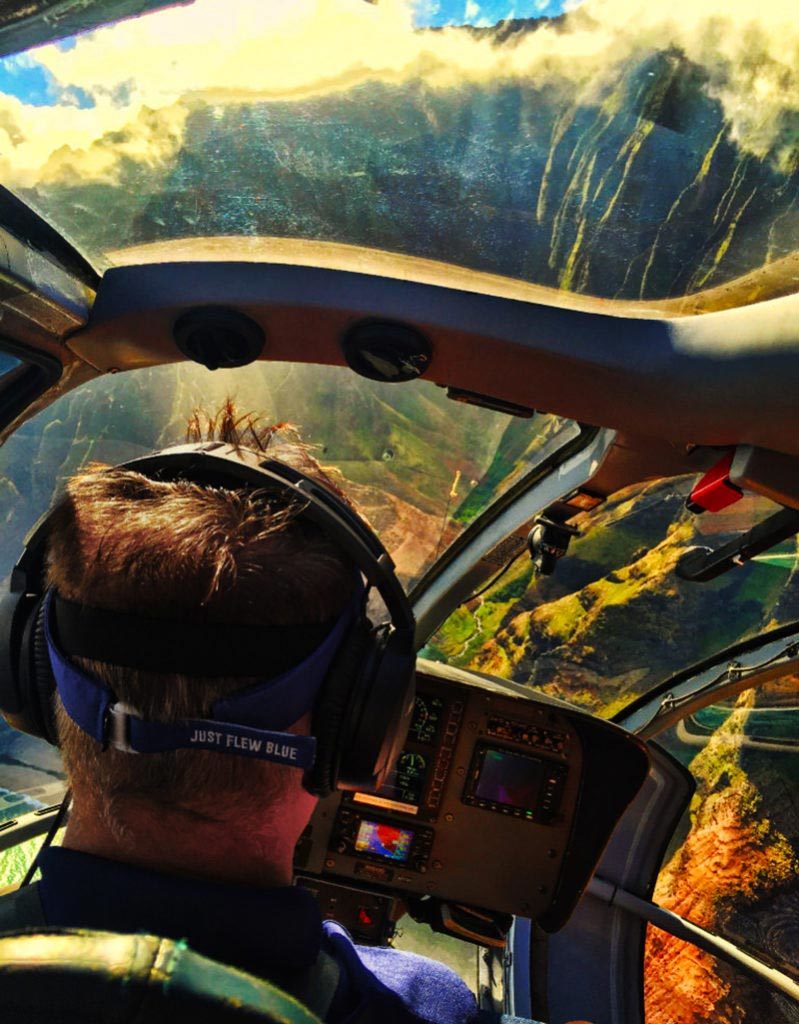 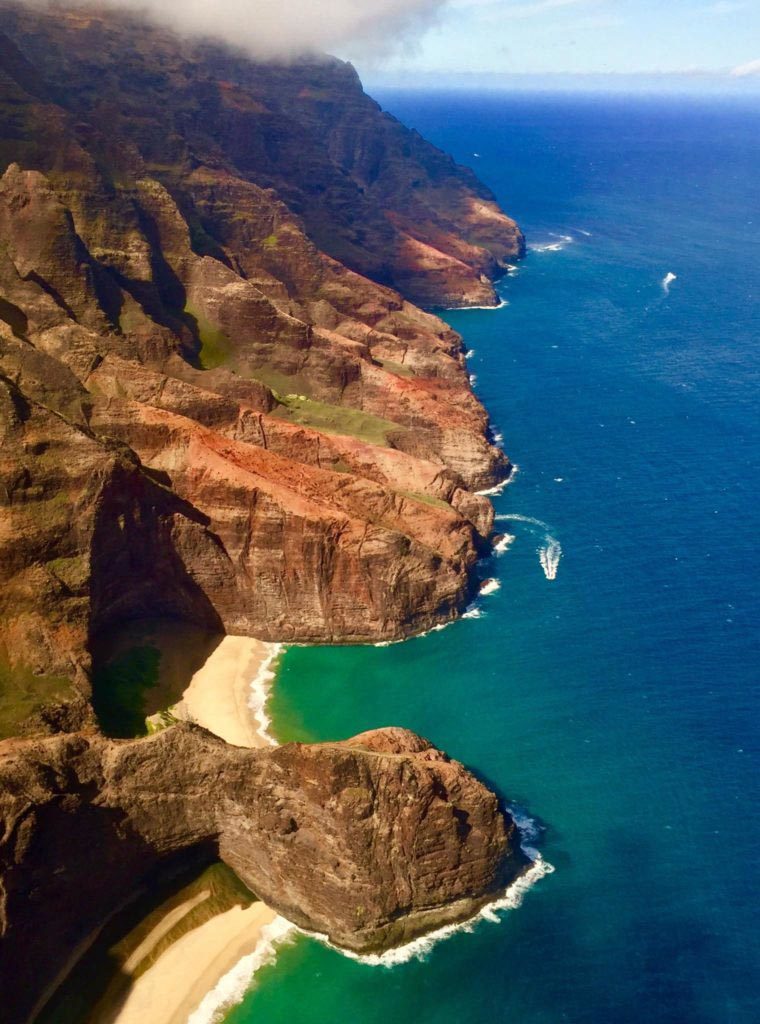 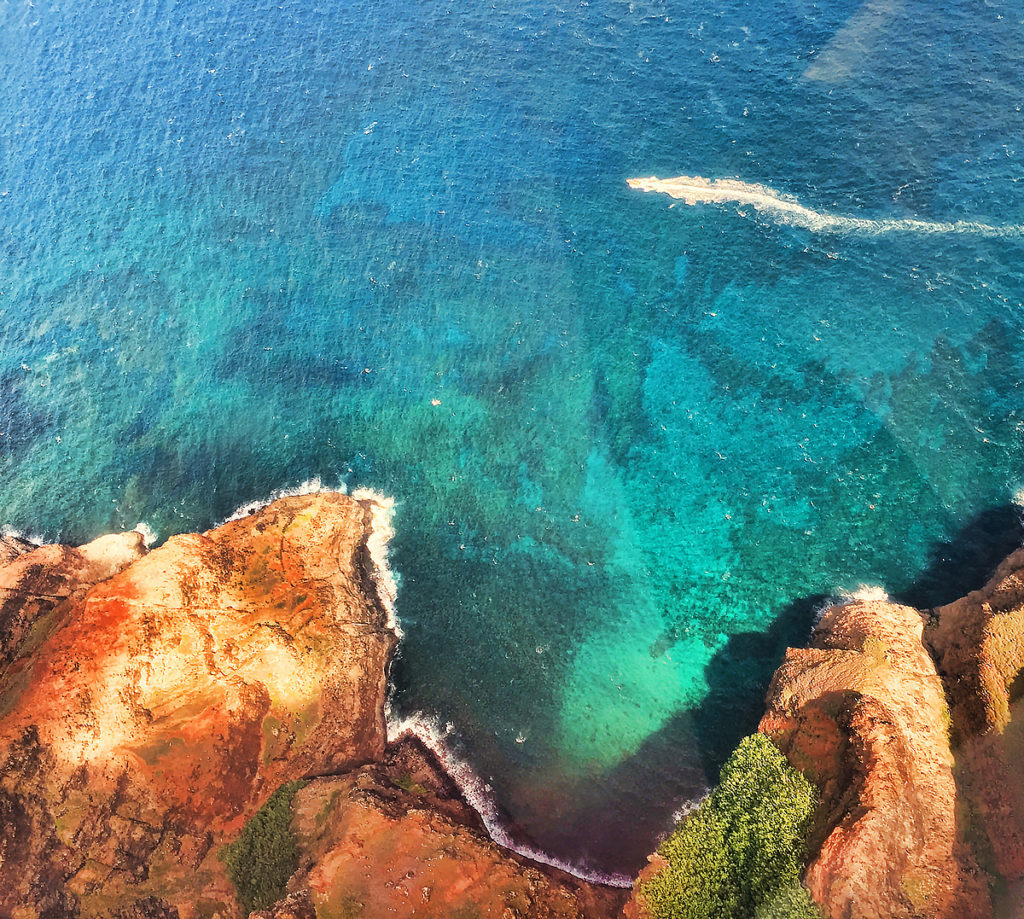 Boat tour as seen from above, Nā Pali Coast.

Hanakapi’ai Beach
The day hike to Hanakapi’ai Beach takes 3-4 hours. You may want to wear shoes you are not too attached to as the red clay from the trail has a tendency to ruin hiking shoes. The trail can be quite strenuous in some areas and enjoyable in others.  It starts at sea level near Ke’e Beach, winds it’s way up to the cliffside trail, then heads back down again when you reach Hanakapi’ai Beach. This part of the trail does not require a permit.

Though it is a beautiful trail you are often reminded by signs that a surprising amount of people have died along this route, either by flash floods unexpectedly overwhelming the stream and washing people out to sea, or swimmers underestimating the tides and rip currents in the unguarded beach. The shear cliff drop offs without fencing located in very remote areas add an additional element of risk. The trail is mostly known for it’s stunning beauty, but its element of danger lends it an exciting edge. 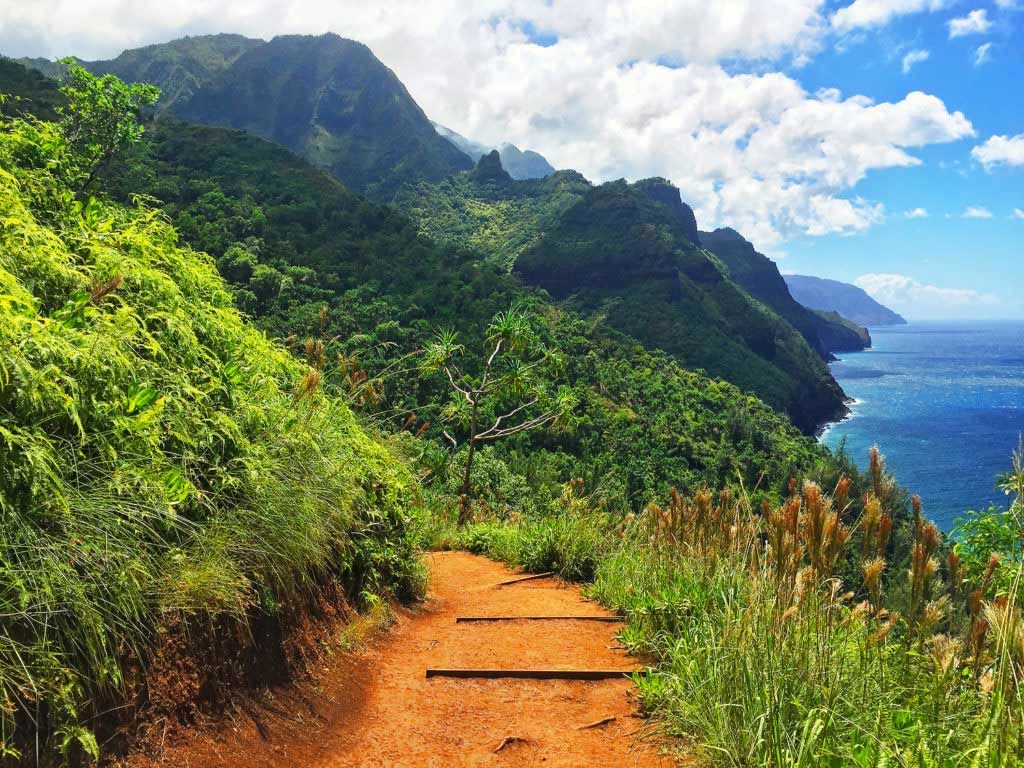 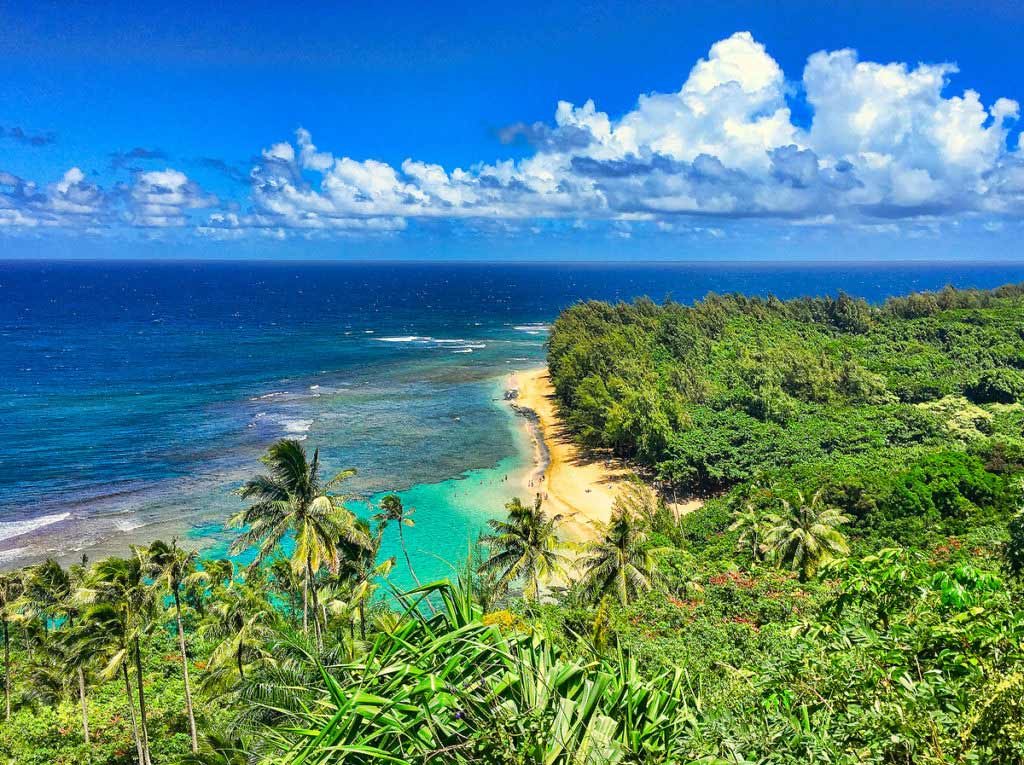 Looking down from the trail onto Ke’e Beach, where the trail started 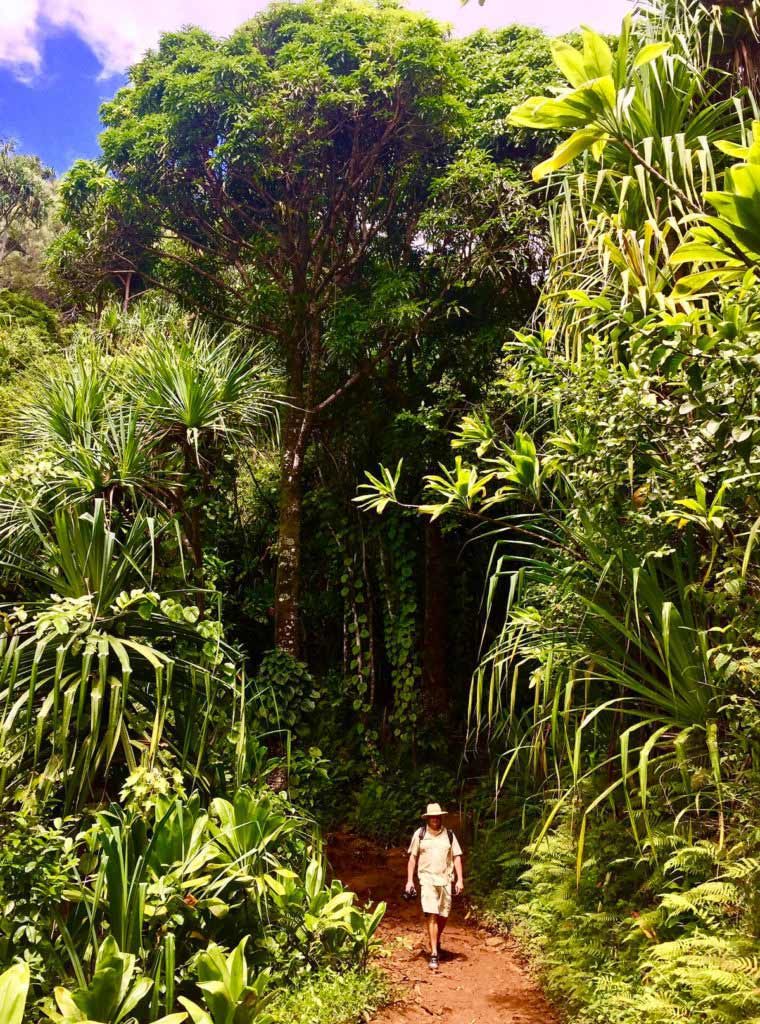 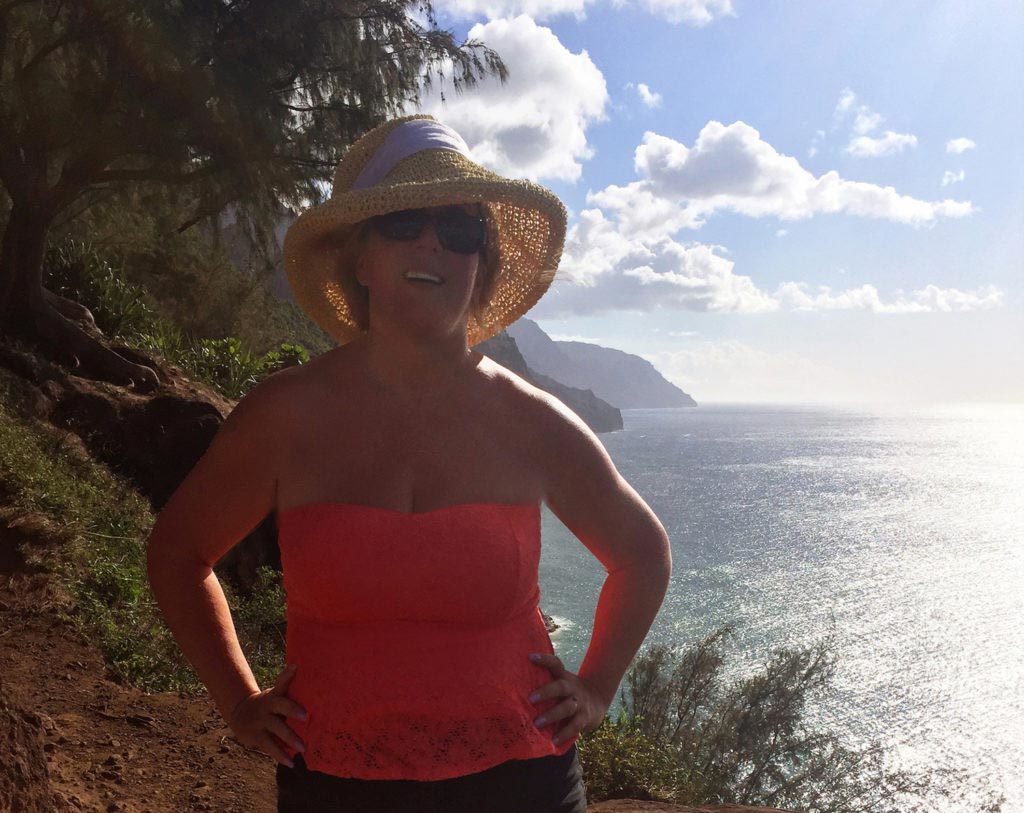 Diann on the Kalalau Trail, Kauai 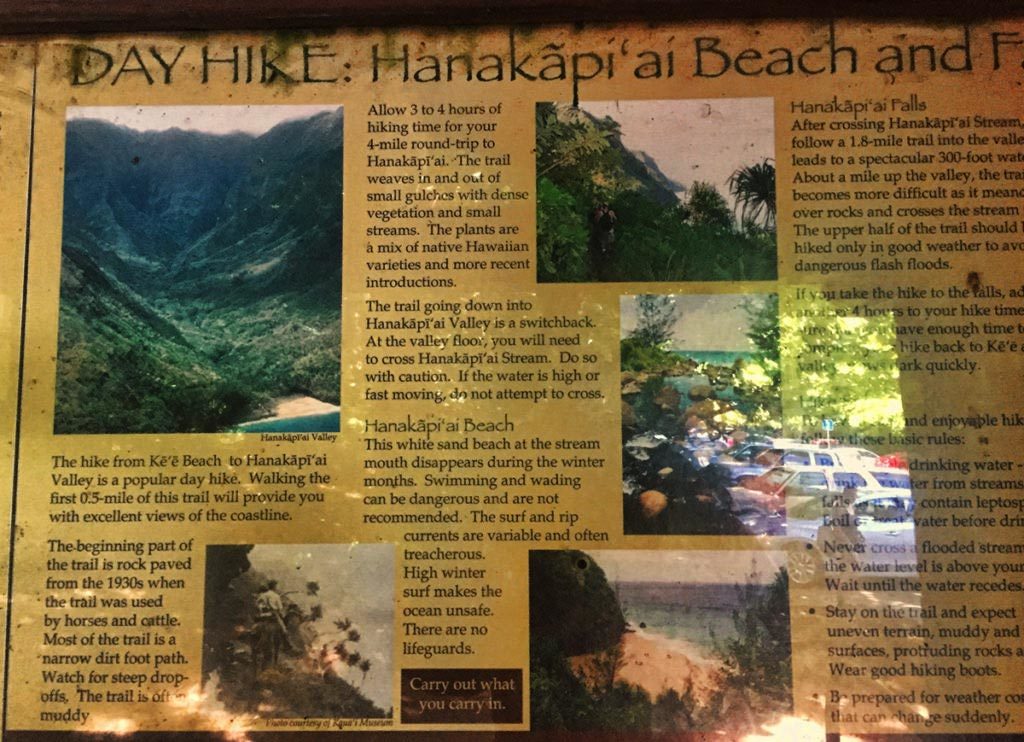 Hanakapi’ai Beach, a day hike set along the Kalalau Trail

Entire Kalalau Trail
The second half of the trail requires a permit to hike it, an overnight stay and includes a particularly hair-raising part of the trail known as crawlers ledge – a narrow path on a precipitous angle, barely wide enough for one person and set along a cliff with a 2,000 foot drop. Along the rest of the trail there are scenic paths, pristine beaches and hidden valleys to explore. While we contemplated hiking this part of the trail, when I went to apply for a permit they were sold out. Book early if this is on your list. 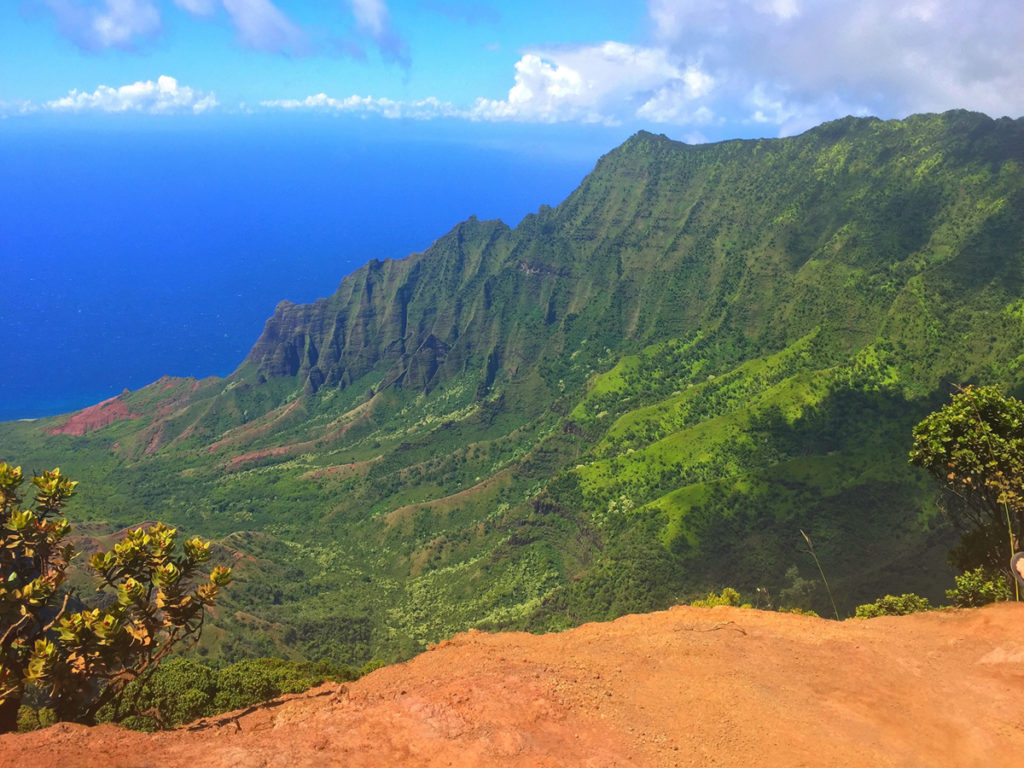 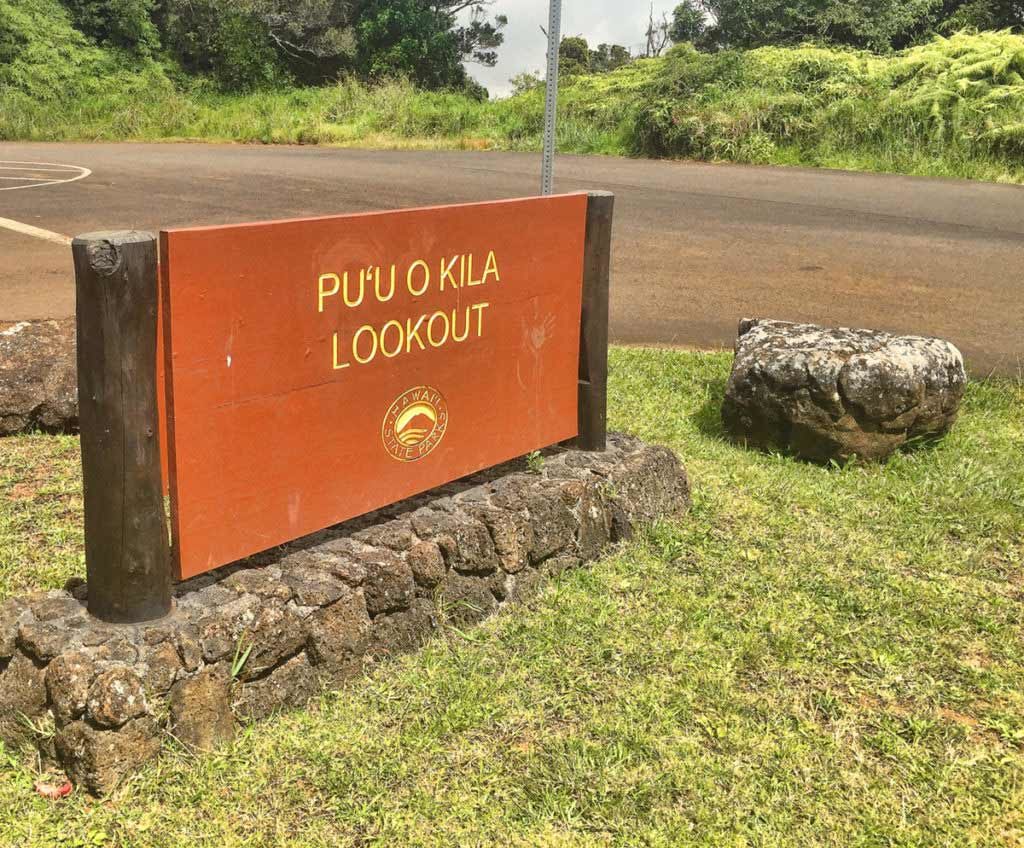 Sign for the The Pu’u Kila lookout onto Kalalau Valley 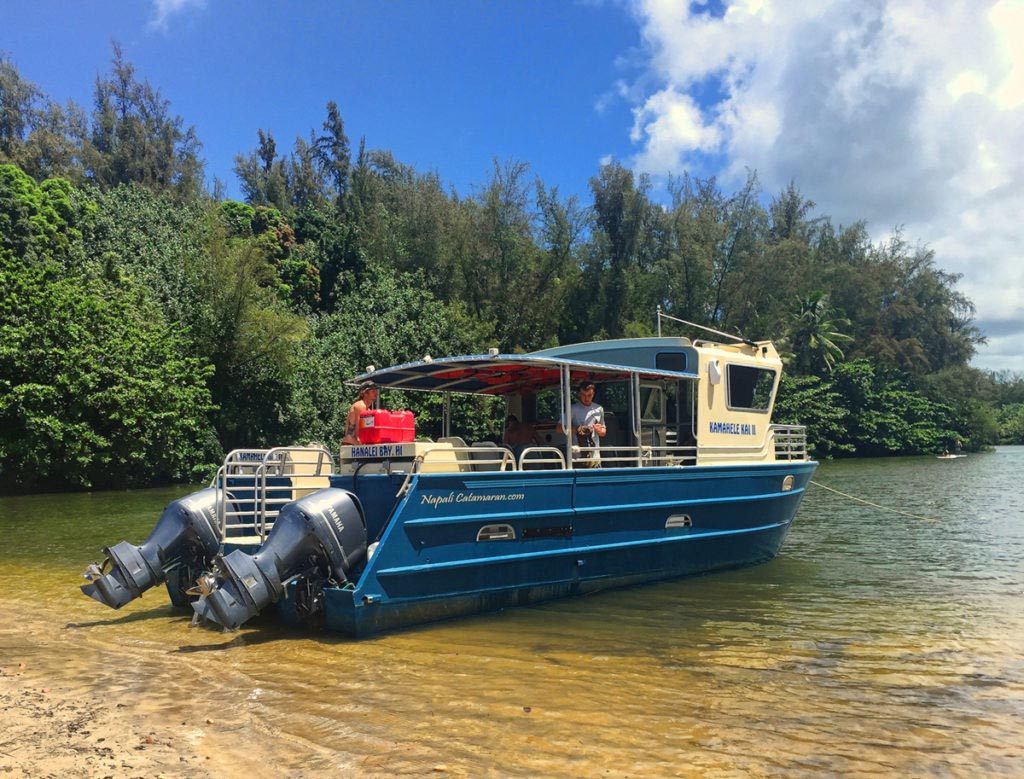 By Sea: Nā Pali Catamaran
The guys at Nā Pali Catamaran run an excellent tour that’s a lot of fun. You meet at their small bungalow office in Hanalei where you sign in and are taken to the main dock at Hanalei Bay. From there you begin your tour out of the bay and head southwest along the dramatic oceanside cliffs. You tour a couple of caves, see hours of lush mountainous eye candy and then it’s time to snorkel with sea turtles and tropical fish.

You can take tours out of Hanalei or out of Port Allen. If you are staying in Princeville as we were, Hanalei is much more convenient as tours out of Port Allen add an extra hour onto the boat ride just to get around to the cliffs. On our tour the ride back to Hanalei was incredibly rough due to afternoon tides and wave direction, do not plan on taking photos on the way back, merely concentrate on keeping dry! 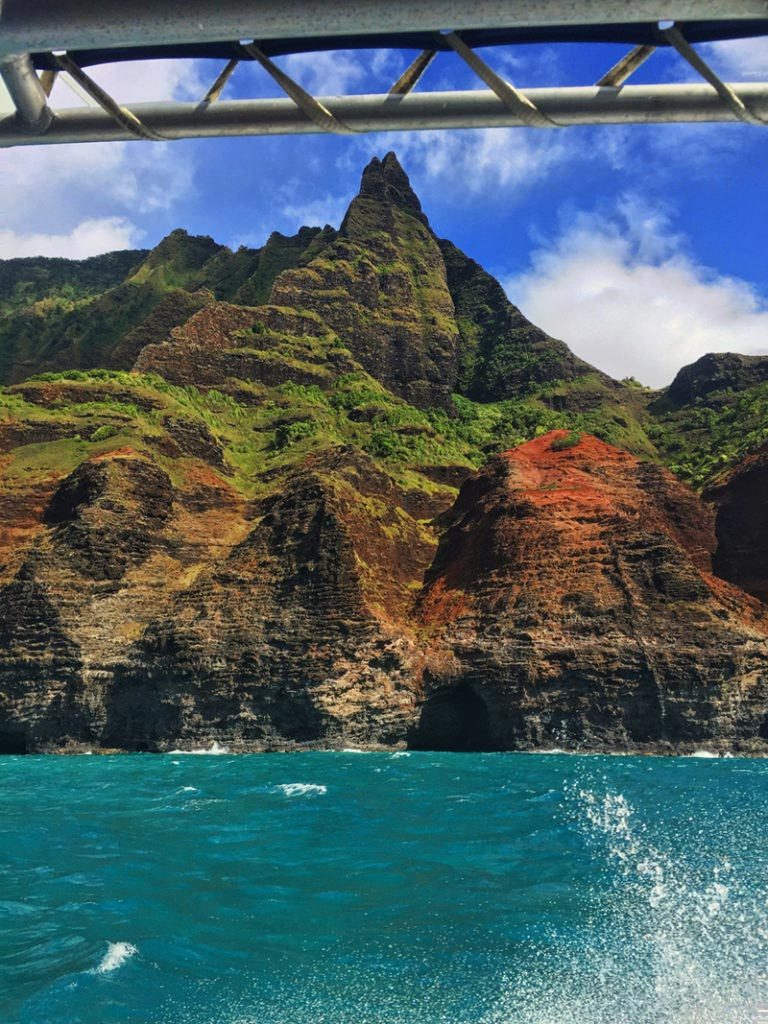 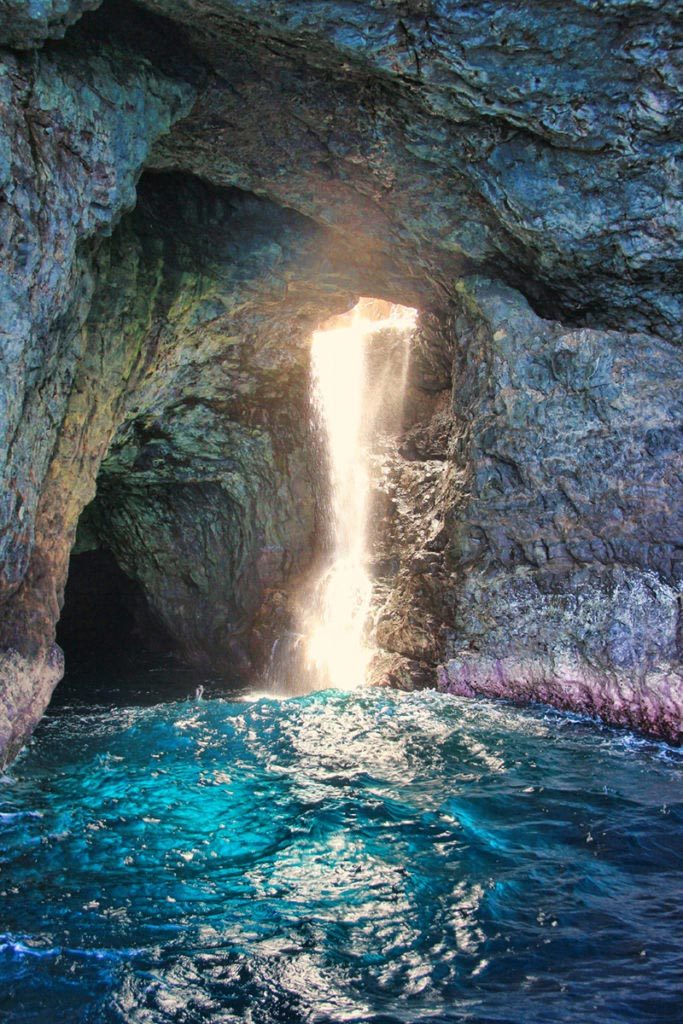 Inside a Sea Cave looking at a Waterfall, Nā Pali Coast 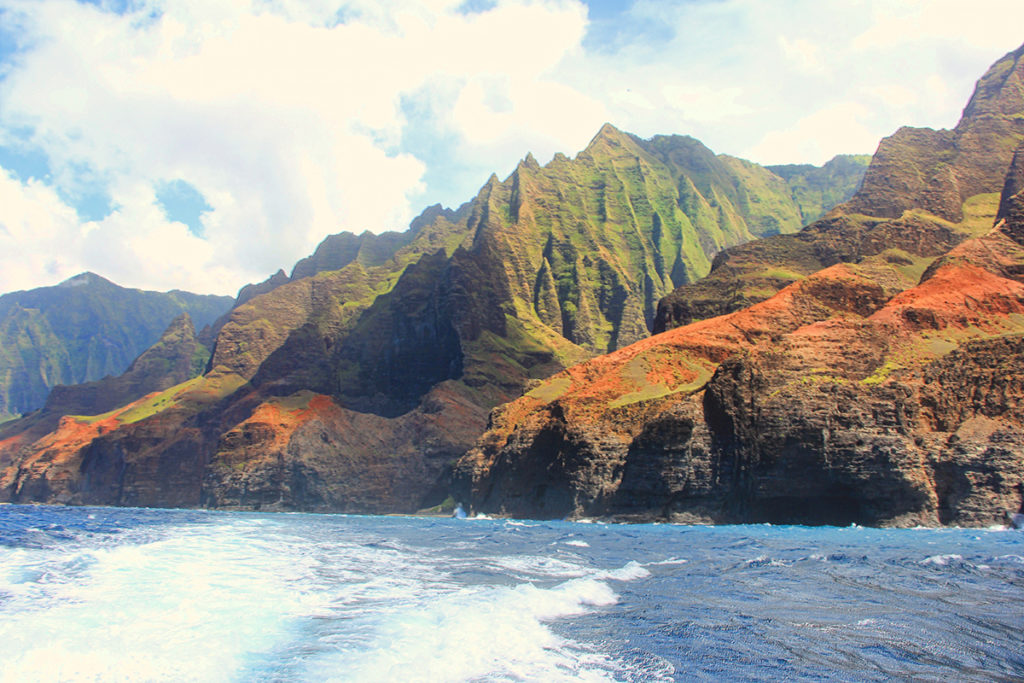 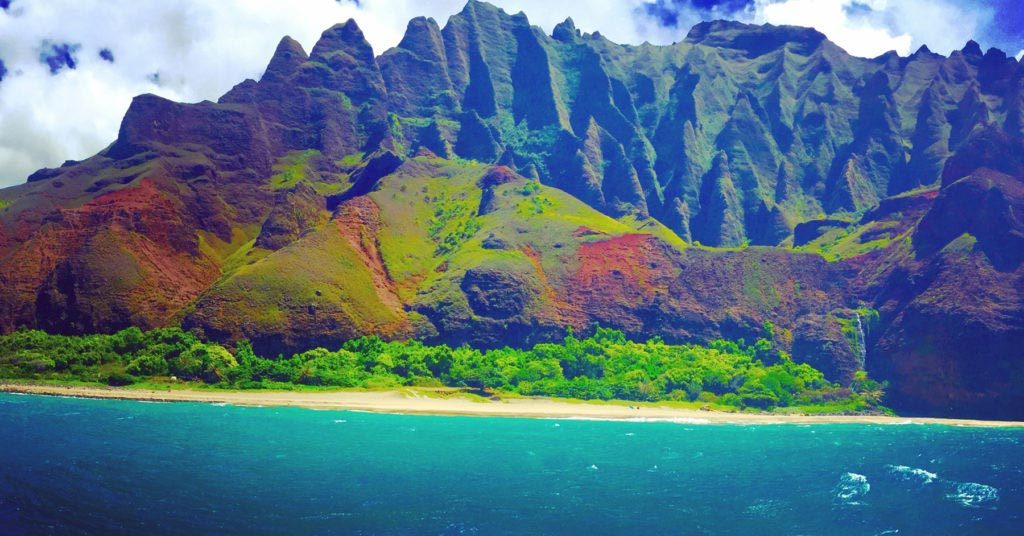 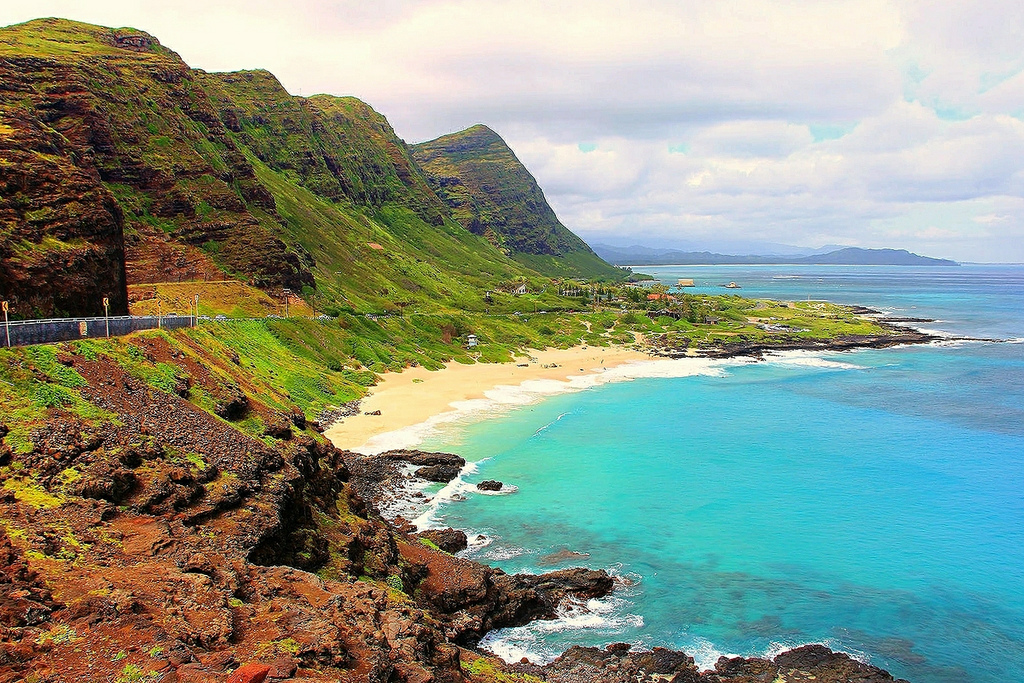