A World Away in Far-Flung Fiji

A tropical island chain in the South Pacific – Fiji is on a lot of people’s “list.” I found out just how many when I started posting photos to my Facebook page. Near Tahiti and New Zealand, it is an 11-hour flight from Los Angeles via Fiji Airways. Most know of it from the bottled water brand. Others have heard of it for the diving – the main reason we were there. It is also the filming location of Tom Hank’s Castaway and Brooke Shield’s Blue Lagoon. 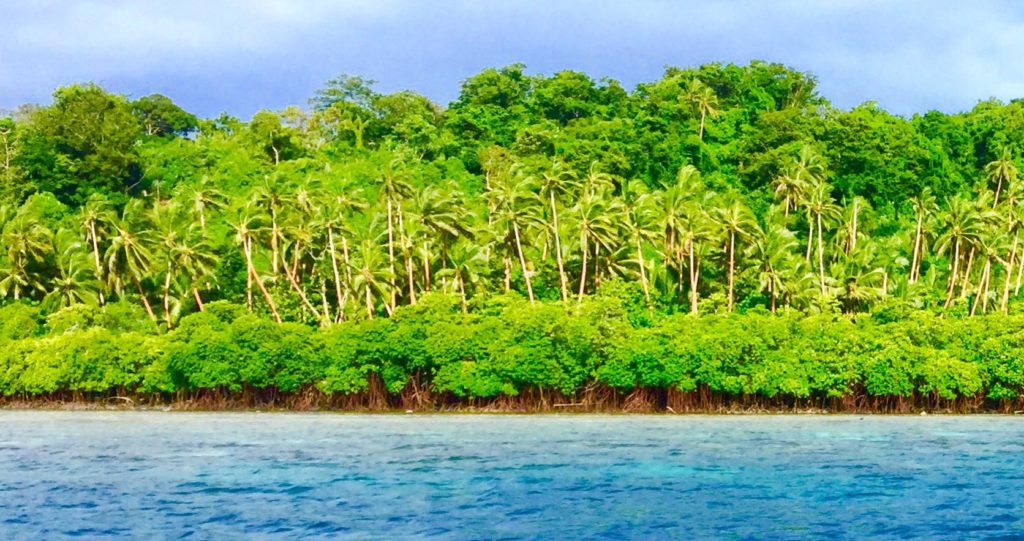 When we were trip planning, I could not find much information on Fiji beyond the official tourism site and a few videos. It is not a widely reported on destination like Hawaii or Tahiti. If you’re planning a trip to Fiji, you should know that it is a large place. The size of the main island of Viti Levu is about the size of the Big Island in Hawaii. This means that a drive which looks quick on the map actually takes hours along the windy main roads set through many local villages. The second largest island of Vauna Levu is somewhat smaller like the size of Maui, beyond this Fiji is made up of over 300 islands dispersed over many square miles, with the larger island chains of the Mamanuca’s and Yasawa’s being popular destinations. 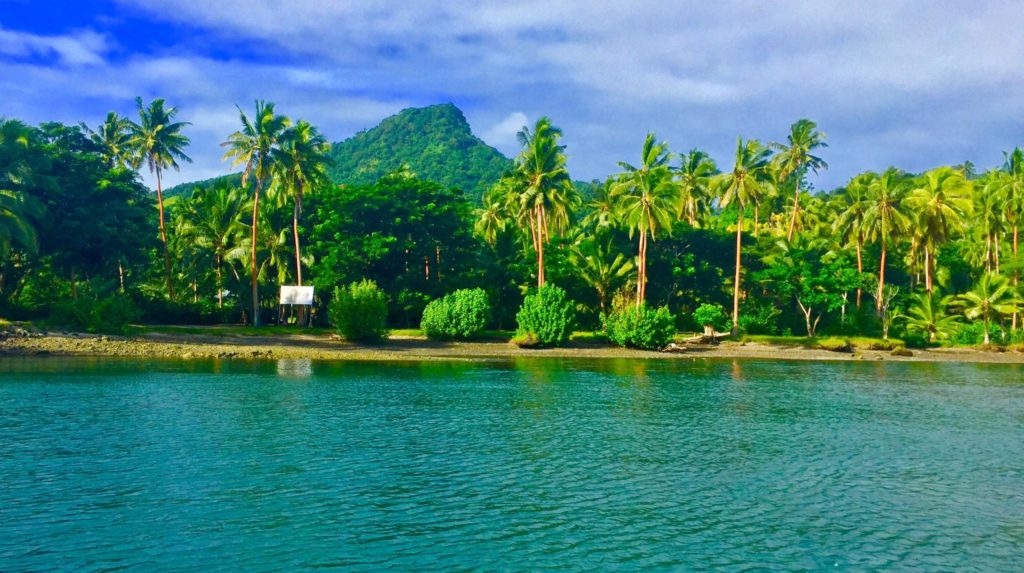 Fiji’s main attractions are it’s generous supply of secluded beaches, thickly lined with rows of tall coconut palms; it’s small, private one-resort islands many would dream of being stranded on and its pristine coral reefs. There’s a reason why it was chosen as the filming location for two popular movies about being stranded on an island in the South Pacific. It has many of the strengths of more popular South Pacific tourist destinations but is not overrun with tourists or overdeveloped with resorts. Much of Fiji has an untouched, exotically rugged feel. 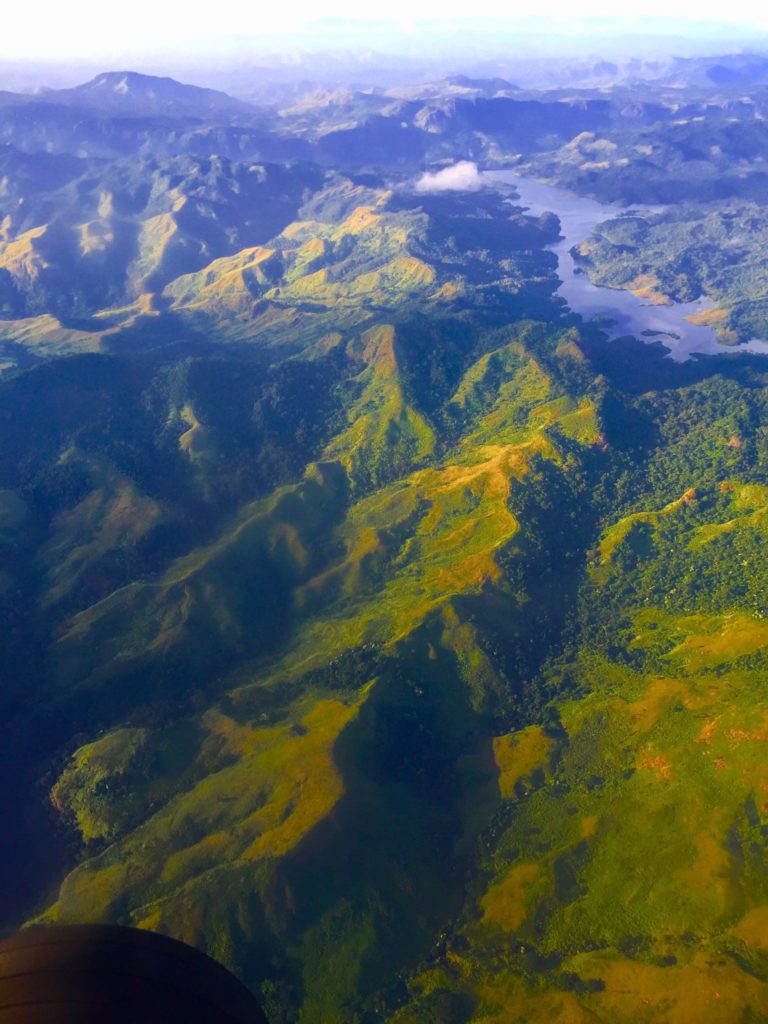 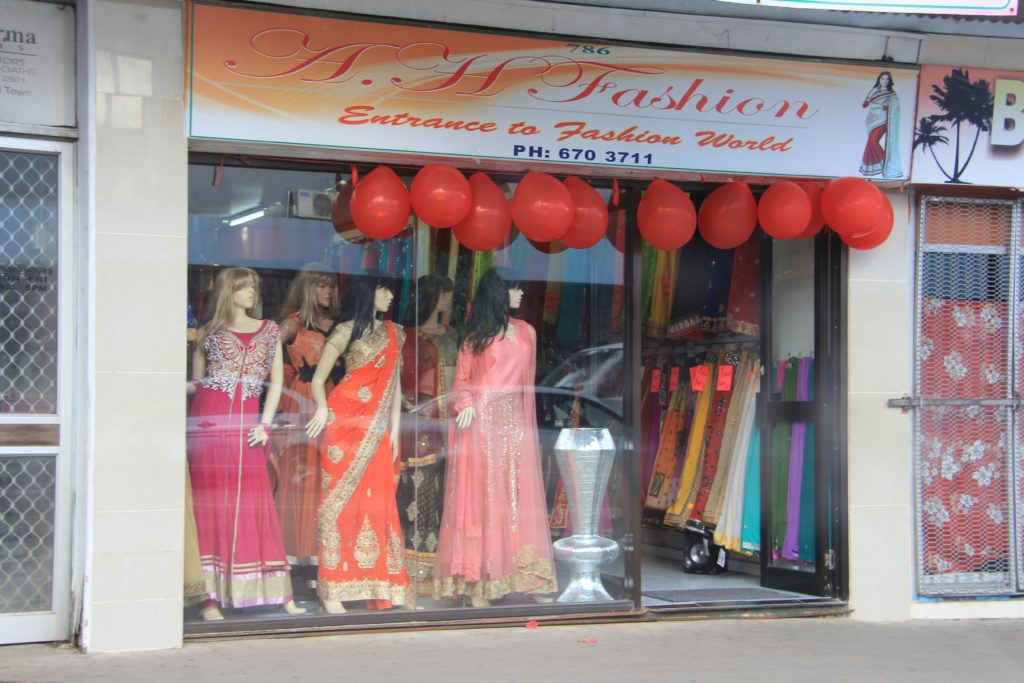 The Culture of Fiji
The island is considered part of Melanesia and consists of two main cultures – Fijian and Indian. The Fijians are a tribal people with chiefs presiding over small villages. Indians were brought in to work the sugar plantations by the British government when Fiji was under their jurisdiction. In Nadi I saw many stores selling saris. We also saw every type of religion represented here in churches, hindu temples, mosques and jewish temples, although the Fijians are largely Christian. 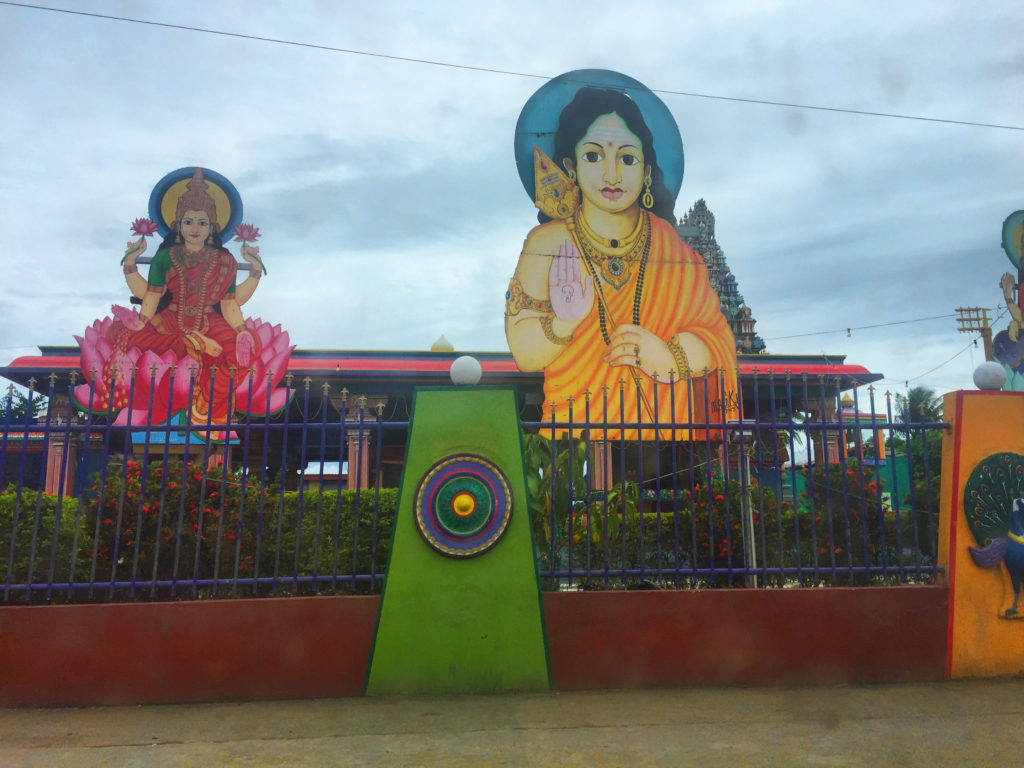 Fijians are a very friendly people who always greet tourists with an enthusiastic Bula! (literally meaning life)  History tells a little different story with Fiji having been one of the main cannibal islands along with Papa New Guineau and the Society Islands. Main targets were European explorers and missionaries and cannibalism was seen as the ultimate way to triumph over one’s enemy. Though the last known act of cannibalism was in 1867, gift shops still sell the cannibal fork – a special wooden fork chiefs used to eat human flesh with, as handling it was thought to cause skin disease. Rest assured that cannibalism is not practiced today although I’ve seen a blog or two speculate otherwise. 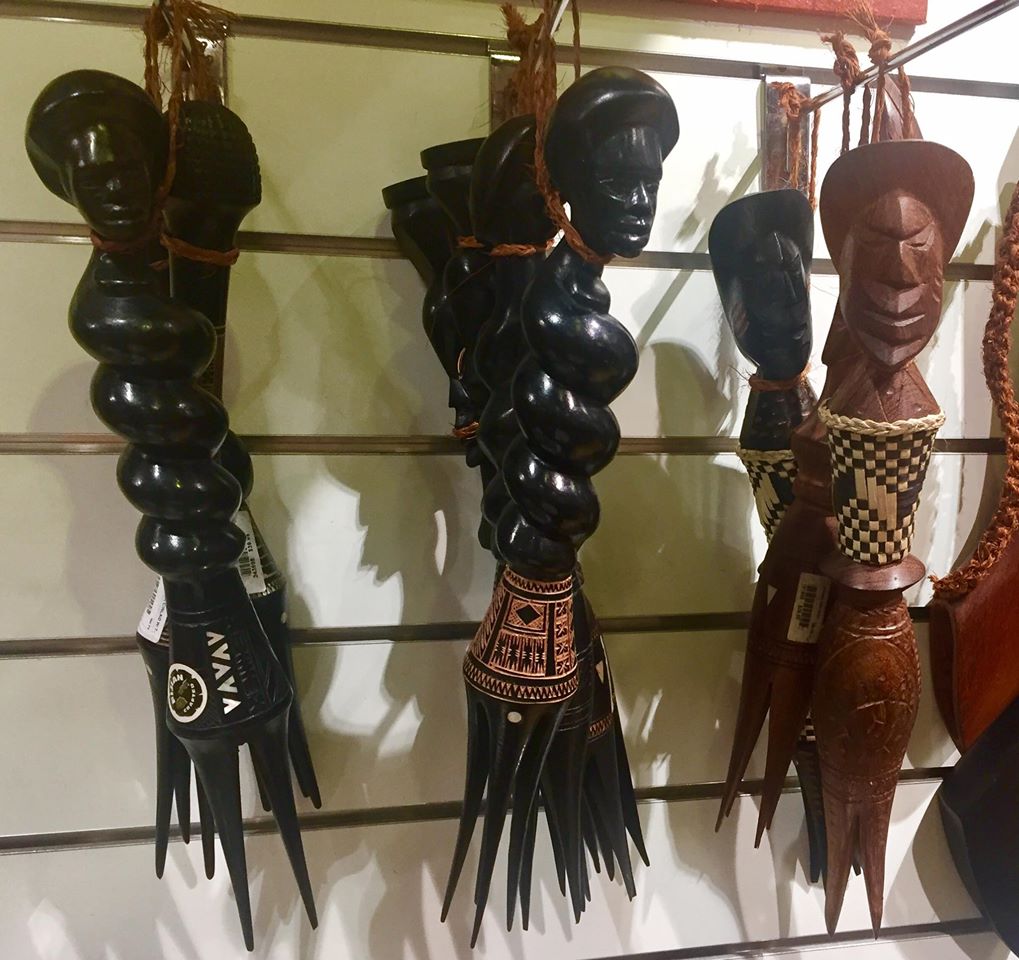 International flights come into Nadi (pronounced Nandi) and the main resort area on this island is Port Denarau.  There are many large global chain resorts, a central shopping and dining district and island tour boats based here. You will usually find lots of Australian tourists as it is only a 3 hour flight for many of them. There are also many private residences in Denarau.

Doubletree Resort Across the Water

The Sonaisali Resort, now the Hilton Doubletree Fiji
When researching hotels, I looked carefully at the resort experience – the pool, beach and entertainment area. Though prices were similar to resorts in Denarau, I kept coming back to the Sonaisali Resort, now the Doubletree. Their large, well-spaced bures, palm covered island and spectacular resort pool with swim up bar won me over. You need to take a boat to get to the resort which seemed exotic. On the ride over you look onto hundreds of palms hanging over the beaches and you know you are far away from home. The staff are friendly.

Ride to the Doubletree 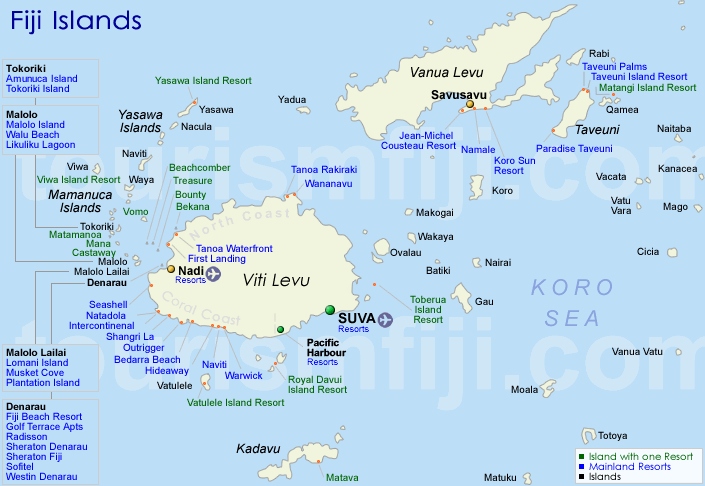 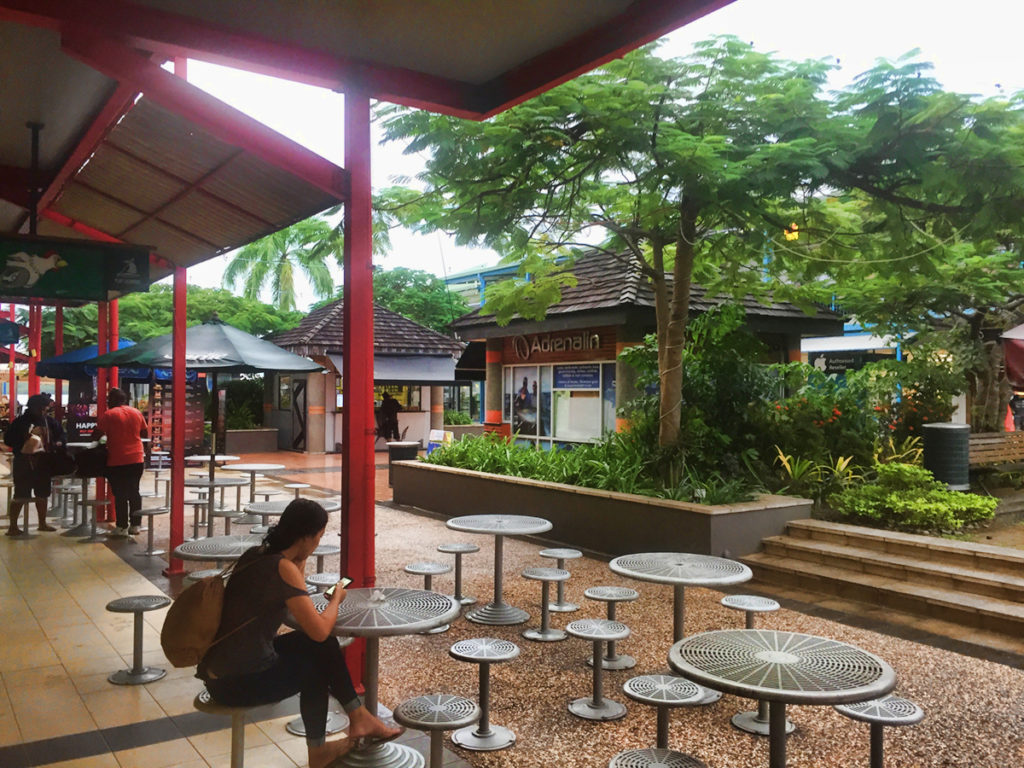 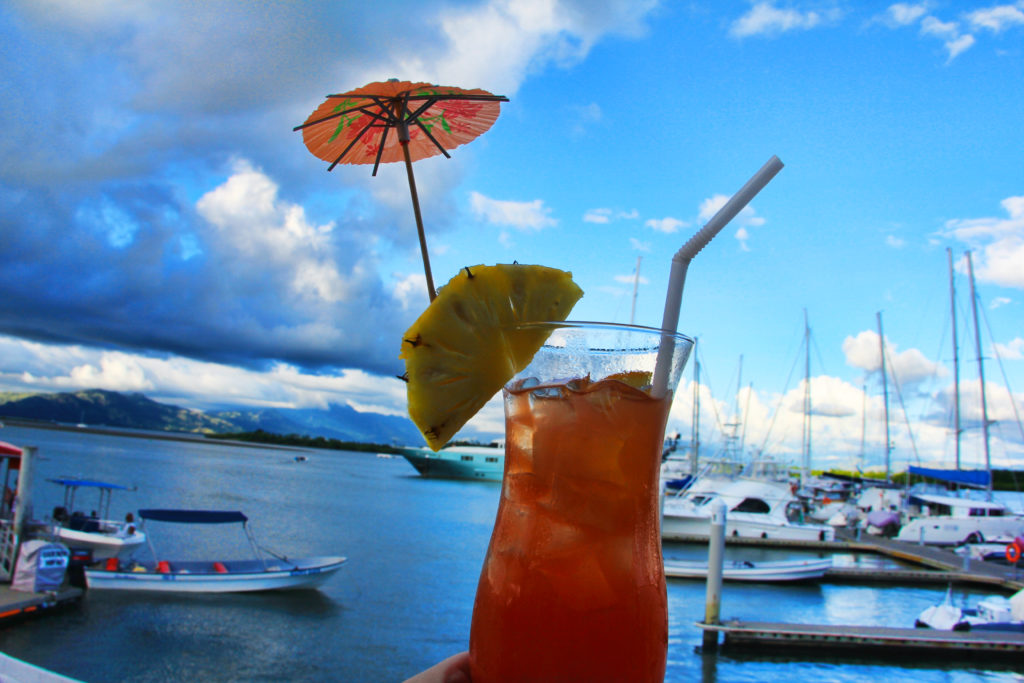 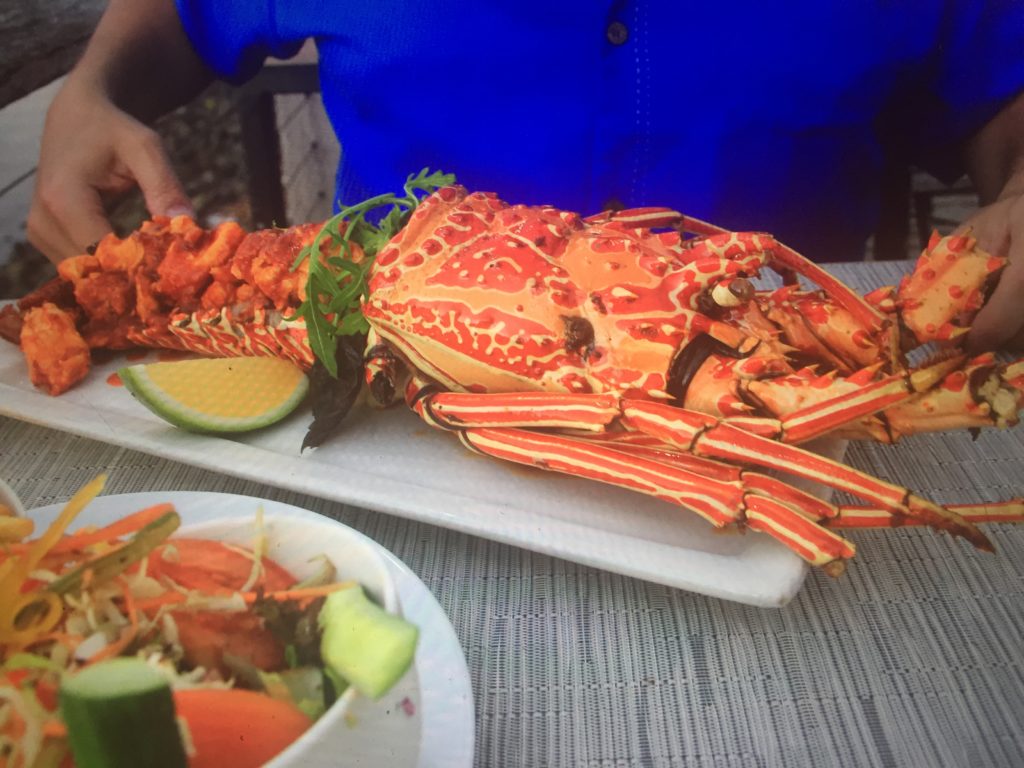 Viti Levu
Once outside of Denarau, the road becomes more rural with locals walking along side of it and horses, cows and stray dogs occaisionally darting out into traffic. Due to the lack of street lights and sidewalks, as well as narrow winding roads and erratic driving, many articles recommend against driving at night. They do drive on the left side of the road with the car driver’s seats on the right of the vehicle.

We drove from Nadi to Pacific Harbor on the south side of the island, as this is where our first dives were. Queens Road winds through the coral coast, with many villages, lush vegetation and locals selling produce in roadside stands. Beaches and bays rimmed with coral reefs show up around many corners. Pacific Harbor is a resort area near Beqa Lagoon, an area known for it’s shark diving and reefs. The drive here took two and a half hours from Nadi.

SCUBA Diving in Fiji
There are three liveaboards which service Fiji divers as diving locations are spread out over a great distance. If you choose not to use a dive boat you will have to travel between locations. I have mixed feelings on liveaboards – they do allow a great social experience and easier access to diving with great service but often you miss out on the land experience. They are also expensive but in Fiji with a good deal of travel required between the best diving locations it probably works out to about equal.

The famous Beqa Lagoon shark dives are accessible out of Pacific Harbor near Suva while the Rainbow Reef is located between Vauna Levu and Taveuni Island, an hour and a half flight from Nadi. We utilized a resort near Denarau as our home base and took two separate trips – one to Pacific Harbor to dive with sharks and the other to Taveuni to dive the Rainbow Reef. Additional sites are Rakiraki to the north of Viti Levu and Astrolabe Reef near the island of Kadavu. We were told the best two dives were the Beqa Lagoon shark dive and the Rainbow Reef. 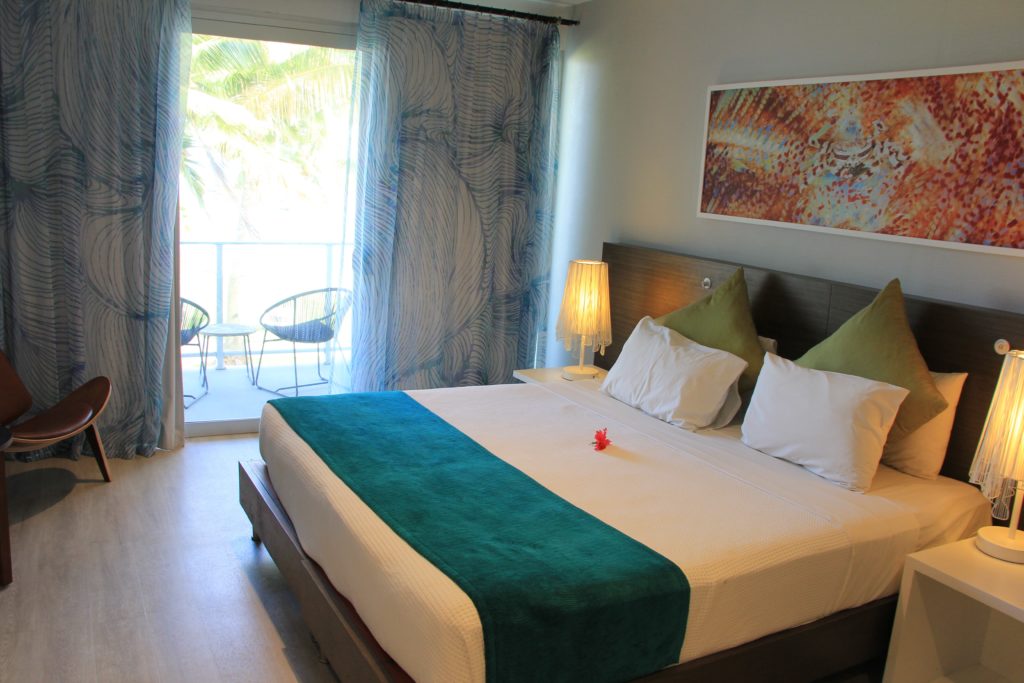 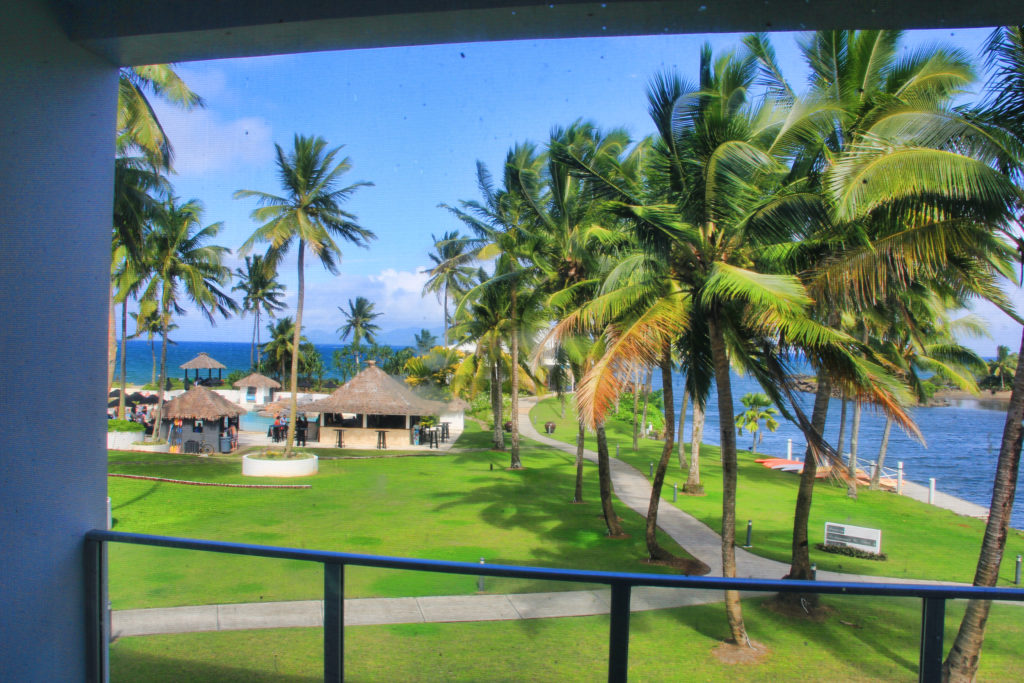 Beqa Lagoon, Beqa Adventure Divers & the Pearl Resort
We chose Beqa Adventure Divers to do the shark dive with and they can pick you up at your hotel dock if you stay at the Pearl Resort. My husband did the dive twice for his milestone birthday as the close proximity to 20 bull sharks being fed was exhilarating. He says it was the best dive of his life. The next day we dove the reefs. Weather was somewhat rainy and the water was rough with 3-5 foot waves, but underwater it was just fine. This is the windward side of the island, we later returned to the Leeward side in Denarau to enjoy more sunshine. 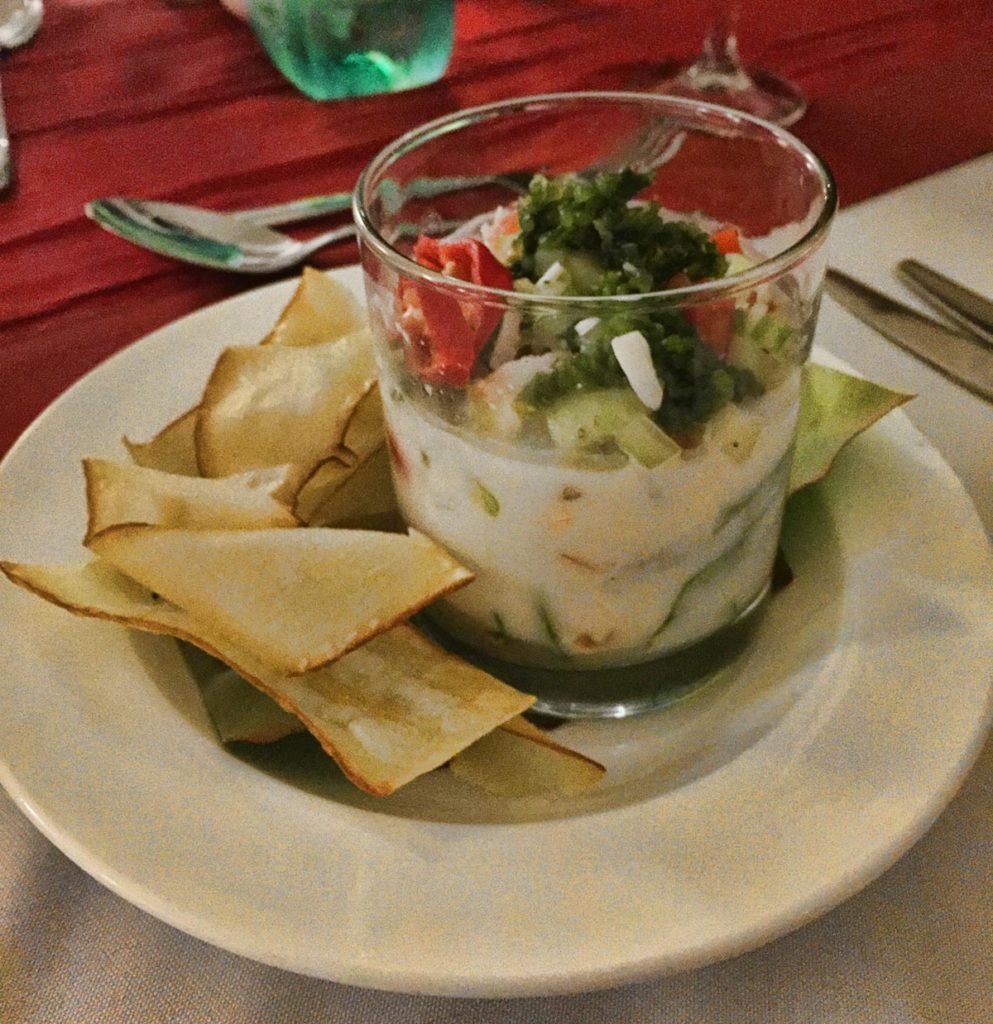 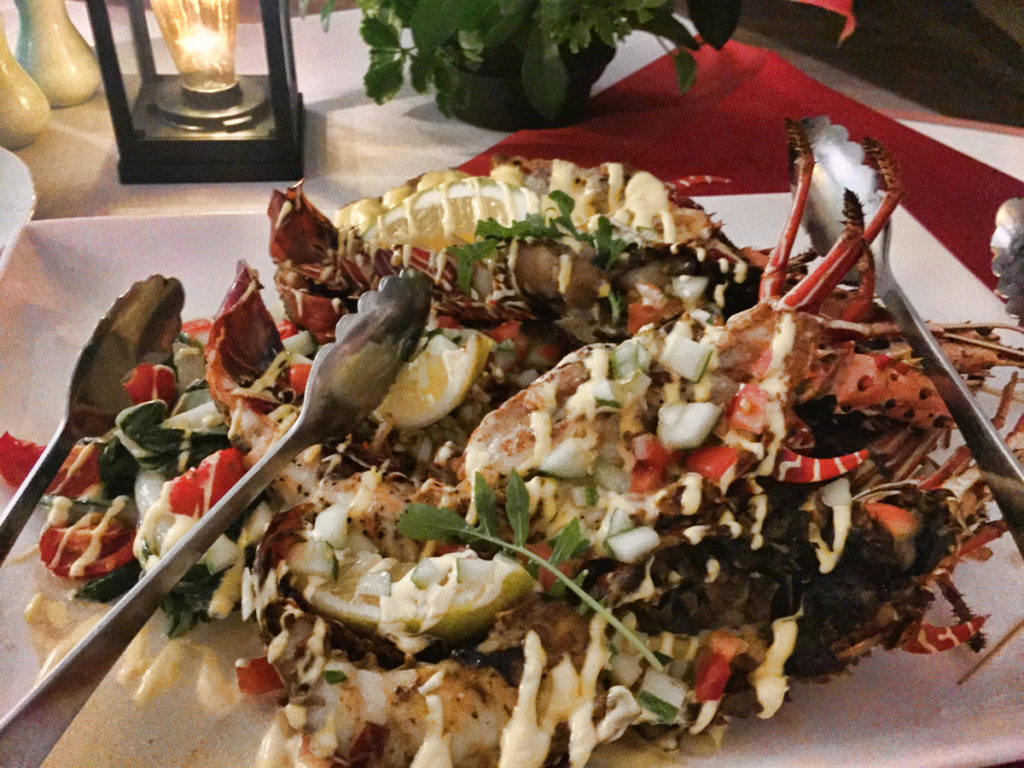 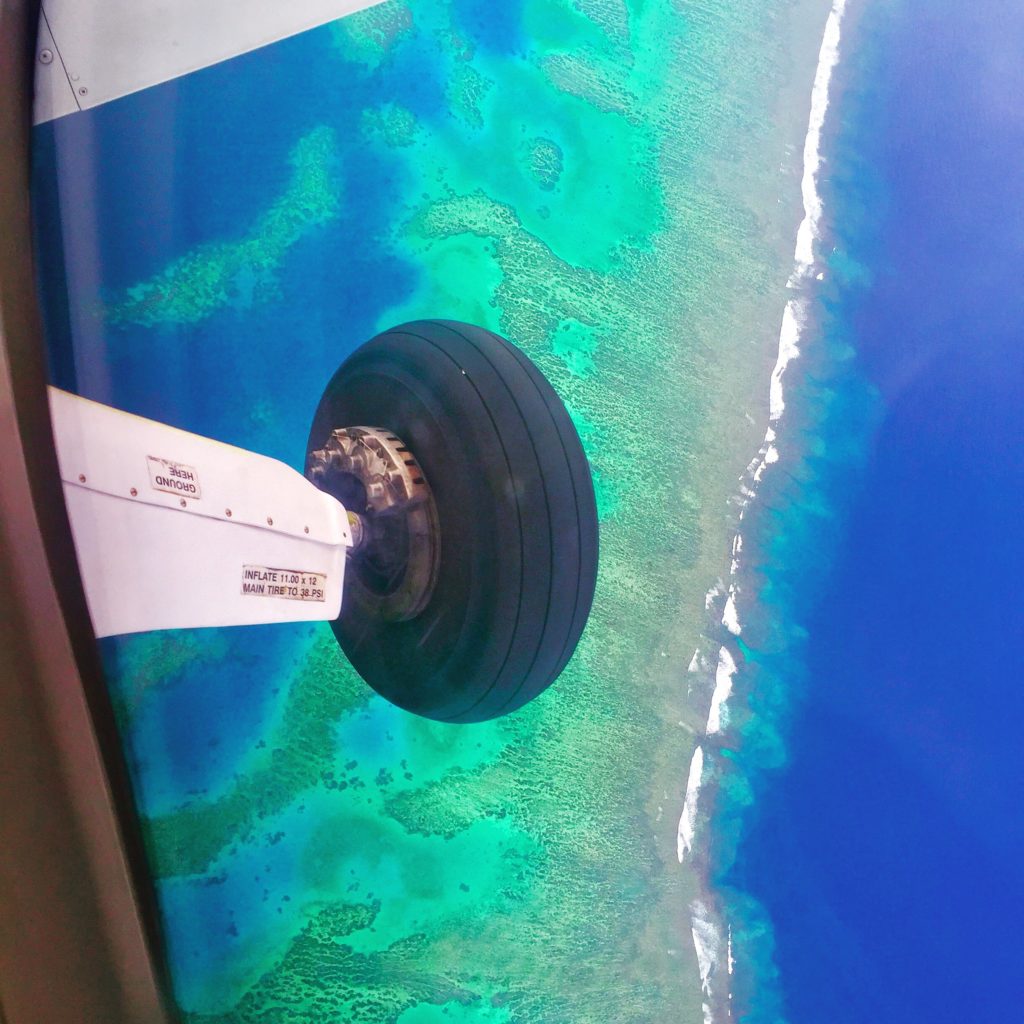 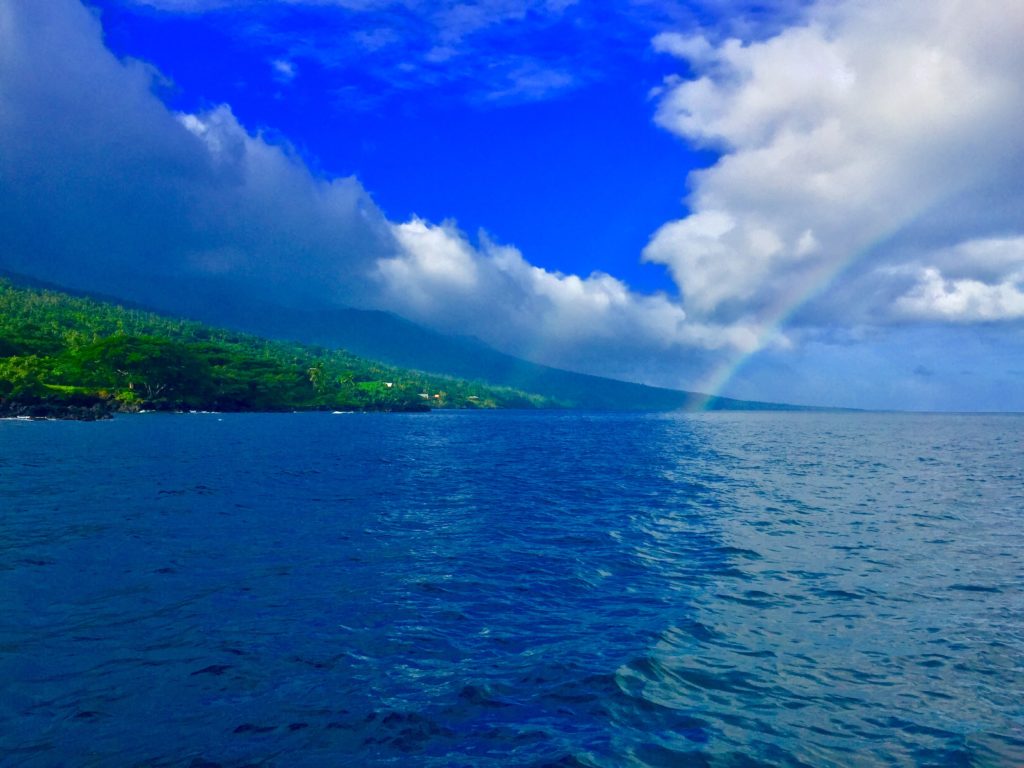 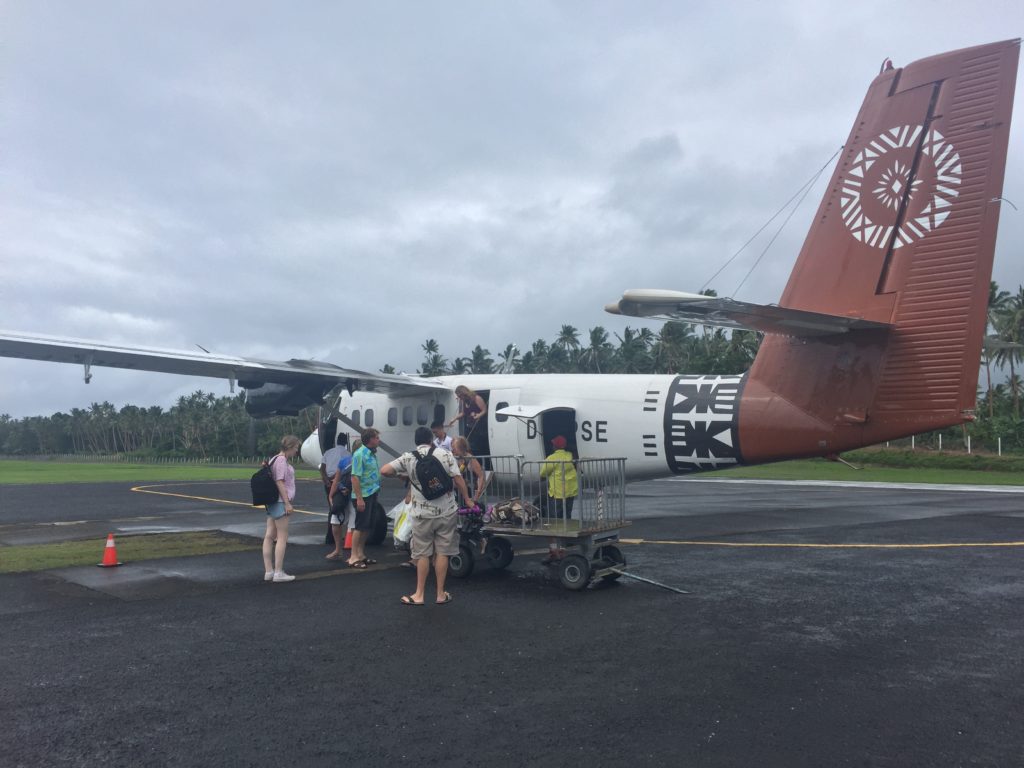 Taveuni Dive Resort and the Rainbow Reef
We flew the Fiji Air Link over to Taveuni, considered the Garden Isle of Fiji. Once on the island we understood why it is called that with it’s lush vegetation and quieter feel.  The owner of the Taveuni Dive Resort picked us up at the small, open-air airport and took us on the 30 minute drive to the resort. 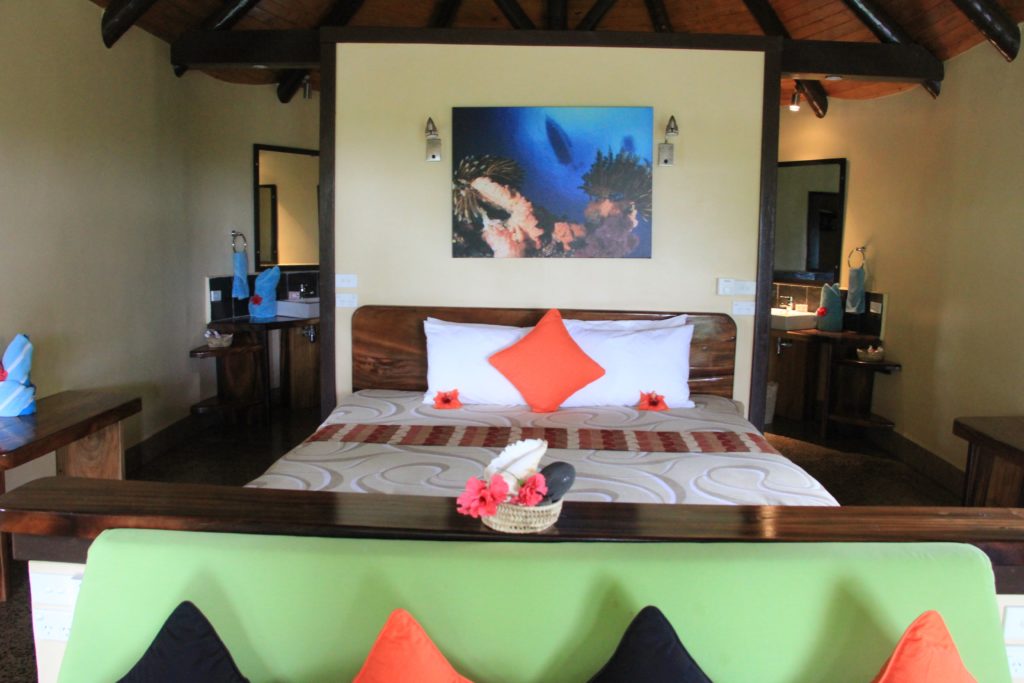 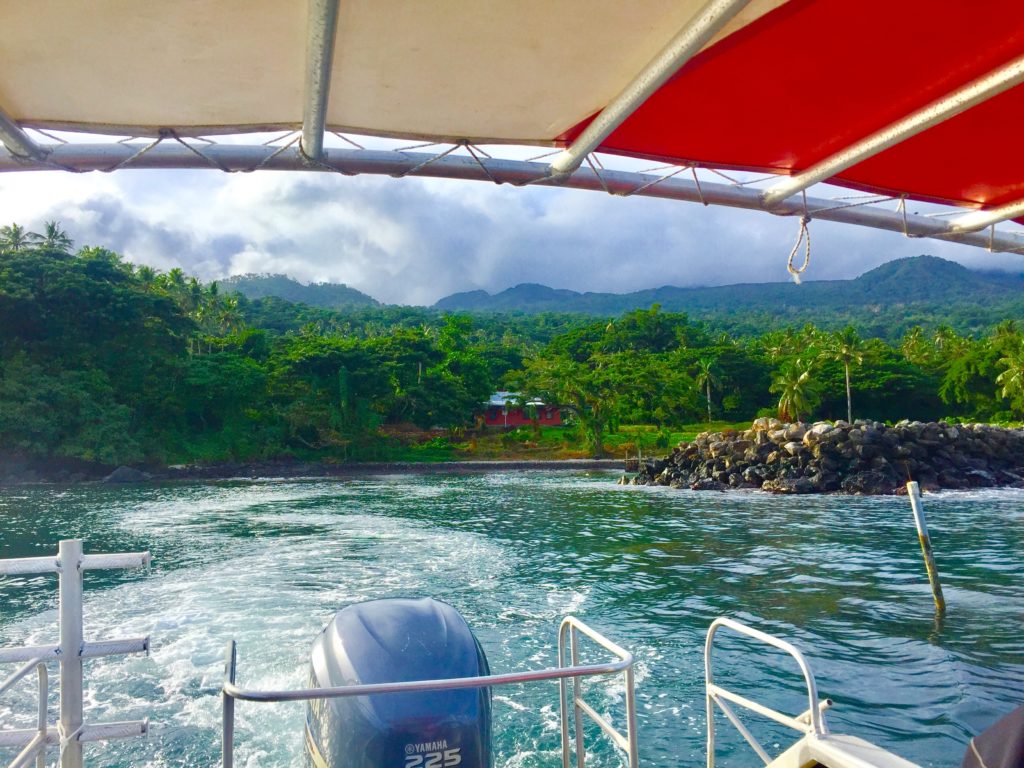 Leaving the Nearby Cove for Our Dive, Taveuni Dive Resort, Fiji

The resort is a fairly new, with eco friendly design, lush vegetation and friendly staff. You get your own tropical bure – a small villa which is very common in the South Pacific.  It is outfitted with fresh flowers everyday, We purchased the meal plan and were provided with meals at the common dining area and the staff tried hard to cater to individual preferences. The food was unexpectedly good given its remote location. The other guests from Australia and Europe provided interesting conversation. The resort was staffed by locals as well as John and Leo, two expats from the US and Europe.

In the morning the dive boats were a short drive down the hill, based in a beautiful cove and from there it was a quick boat ride out to the Rainbow Reef.  Our first dive was impressive, the reef really is in great shape and the color of the soft corals topped just about every reef I’ve ever seen.  The scene was right out of Finding Nemo. It is becoming clear to me that you need to go further afield to see impressive reefs – to places not overrun with tourists.  We also dove the White Wall, a renowned dive site with white coral. This dive had two great swim throughs.  When we left this resort we were somewhat saddened as our trip was coming to an end and we’d actually made some connections here. As we drove to the airport we stopped at the International Dateline sign and took our picture in front of it. 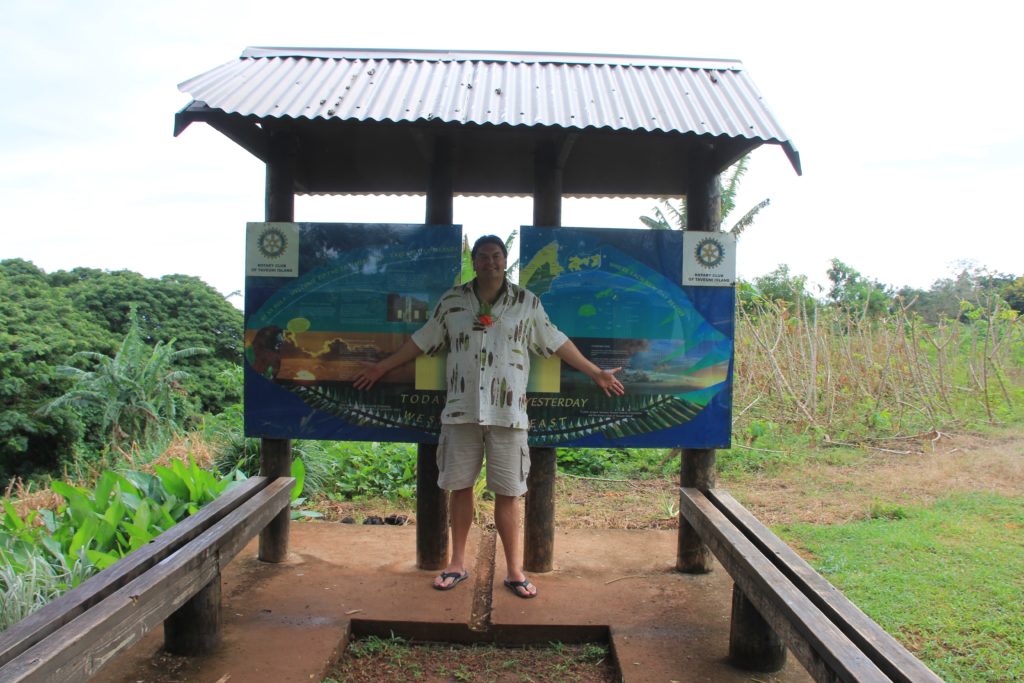 Lessons Learned
If we had it to do over we would have spent some time in the Mamanuca and Yasawa island chains. The resorts here are one to an island and really give the feeling of being stranded in a tiny island paradise. You can also take boat rides through these chains and even visit the Cloud 9 over-the-water restaurant. One of the resorts, Likuliku, has over the water bungalows. Because we had two separate dive trips dominating our schedule any down time was spent at the resort pool, which was phenomenal.  After all, when in a tropical paradise you have just flown 16 hours to get to, you do need to make time for lounging around. 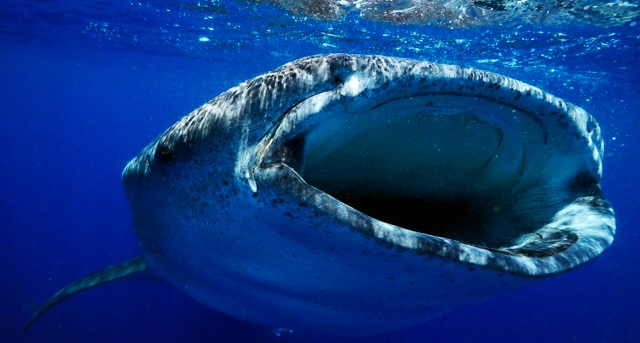